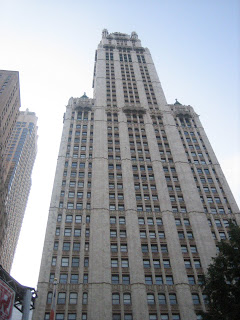 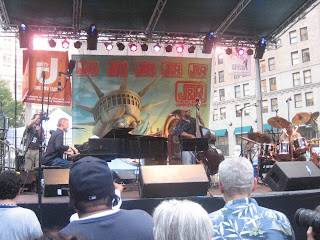 Jazz Giants and Skyscrapers
I was looking forward to an afternoon of jazz sponsored by J&R Music World featuring the trio of Bruce Hornsby, Jack DeJohnette and Christian Mc Bride, that is, until I arrived. I emerged from the fowl smelling soot- laden subway tunnel at City Hall around 3:30, only to be confronted by a ghastly scene of human suffering. About 100 people where scattered around City Hall Park listening to a jazz band as they melted away underneath a blazing sun that was imposing its mighty wrath upon them. As the heat index reached 105 degrees, these folks were flogging improvised hand fans in an attempt to bring some relief, but their attempts were in vain. Each tortured face produced a pool of free-flowing sweat that was creating funky looking stains on their shirts. Summertime in “The City” can be as grueling as any dessert.
After a night of debauchery and two hours sleep, I was no match for the elements, so I beat a hasty retreat to the Beekman Pub around the corner for some attitude adjustment. A shrimp cocktail and three glasses of chardonnay later, I was all smiles as I made my way back to City Hall Park where the crowd had swelled to about 200 people. My timing was perfect; as I was making my way to the front of the stage, Hornsby and company were taking up their positions. Before blast-off, I heard a young lady howl “Catfish (one of my aliases).” It was my friend Elyce, who is to hippy dancing as John Travolta is to disco dancing.
Hornsby and company got off to a fine start as they seemed to be pacing themselves a little during the first two songs. But who can blame them? Even Elyce wasn’t dancing yet due to the sauna-like conditions. The second song of the night, “Charles, Woody and You,” from their new album, sounded Grateful Dead influenced. It reminded me of the Dead’s performance of “Close Encounters” from Eugene, Oregon on 1-22-78. Hornsby’s hit album from the late 80’s and his association with the Grateful Dead in the 90’s are probably the two things he’s best known for, but during this performance he avoided that part of his musical past. Based on this concert, if you don’t know better, you would have thought he was just a jazz legend. His style seemed to be a cross between Bill Evans and Herbie Hancock with a touch of psychedelic madness thrown in. I think his sound might have fit in well with one of Miles Davis’ 1970 fusion configurations.
On the third song of the evening things took off when Jack DeJohnette began to unload on his drums laying down that muscular, full-sounding groove that caught Miles’ attention and landed him a spot on the most visionary album in jazz history, 1969’s Bitches Brew. From the late 70’s through the mid-80’s, Jack use to stop by my house a couple of times a year to visit my father who was his accountant. Other jazz luminaries like Dave Holland and Larry Coryell were his clients as well. My dad wasn’t much of a music fan, but he was familiar with my obsession with music and tried tipping me off to how big these guys were. I was going through a progression that took me from Led Zeppelin to the Grateful Dead at that time. If I only knew, I could have been chatting with them about what it was like to create Bitches Brew with Miles Davis.
Though beads of perspiration were rolling down my back, the incredible music that was bouncing off the skyscrapers took our minds off the pure heat and humidity. Aesthetically and acoustically, there’s nothing like a free outdoors concert in Lower Manhattan. To my right was the Woolworth Building which reigned as the world’s tallest building from 1913 through 1930. Its classy neo-Gothic style architecture makes it one of my favorites. And the way the sound ricochets off these incredible buildings and rolls on down the Canyon of Heroes is magical.
I have a predilection for hearing horn players in the mix when I listen to jazz, but this trio had as satisfying a sound as one could hope for. Christian Mc Bride was unbelievable on bass; at times he sounded like a lead guitarist. The performers ripped through an eight song set lasting about eighty minutes featuring mostly numbers from their latest release Camp Meeting. The CD and the concert both have a classic 50’s/ 60’s jazz feel which I dig, yet there was enough weirdness to stoke the flames and make it sound innovative. I still can’t believe only 250 or so people were on hand for this amazing free event, oh well, it was more elbow room and better photos opportunities for me.
Elyce and I headed over to J&R Music World for a little post concert meet and greet with the musicians. She pointed out a picture of her dancing on the cover of Bruce Hornsby’s live album, Here Comes the Noise Makers – that’s a nice feather in her cap. The highlight of my night was when I went over to Jack to introduce myself and see if he remembered his visits to my house many years earlier. After realizing who I was, Jack's face lit up and he said, “Oh wow, your Lenny’s son, he was a great guy.” Hearing that reminded me of one the last great memories I have of spending quality time with my father. It was the only concert we ever saw together featuring Jack, Dave Holland, Herbie Hancock and Pat Matheny at the Beacon Theatre back around 1990. 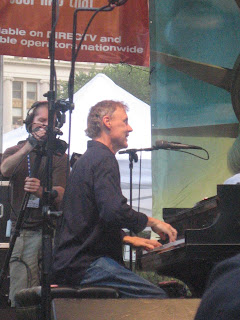