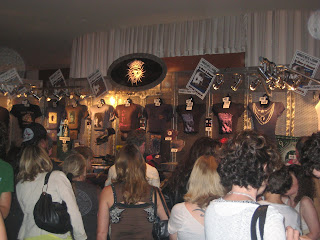 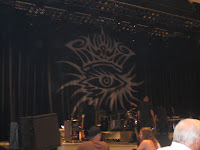 DYLAN IN THE PARK

Although I’ve been trapped in the heart of Manhattan for the past twelve years, the hog-eyed borough of Brooklyn was as mysterious to me as Lewiston, Maine or Mexico City. After exiting the F Train by Prospect Park with everyday commuters, I stopped off for refreshments at a tiny bistro. In the garden, beneath a caravan tent, the waitress poured a FROTHYBrooklyn Lager for me while fondling my upper torso. Greek music and incense filled the air as the scraping of cutlery against plates was offset by birds chirping in stereo. A grey tabby proudly displayed his furry white belly for the patrons, then suddenly whacked a pebble and chased it down the cellar steps. I had to extricate myself from this charming backyard Brooklyn scenery and figure out how I was going to get into Dylan’s sold out performance at Prospect Park.

As evening sky grew dark, I was struck with the realization that my mission was futile. I wasn’t able to find a reasonably priced ticket or scam my way in, so I joined thousands of Brooklynites who were content squatting or milling about the bandshell perimeter. Any view of Dylan or the stage was completely obstructed, and from my vantage point I could hear the music, but it wasn’t loud enough to get off on. I sulked during spotty performances of Rainy Day Women and Lay Lady Lay. A generic set list ensued. Dylan shuffled out the wonton soup, egg rolls, chicken and broccoli, pork fried rice, orange slices and fortune cookie like so many times before. On the grassy knoll, I sat amongst those spread out on blankets. Lonesome Day Blues was apropos for my situation, and well played. Dylan and the band really laid into a fiery offering of When the Levee Breaks. However, an obnoxious Bensonhurst couple bickered non-stop right behind me. They were unhappy with the concert series, Dylan, each other; they were born pissed off. A sullen-faced brown dog sidled-up by my side and licked my face for a minute or so. “Bones come here, I’m so sorry,” exclaimed the embarrassed dog owner. I was fond of Bones, but I decided to relocate.

Sandwiching the next segment with the old timey swinging ping pong waltzes Spirit on the Water and Behind the Horizon, the concert felt like a summer’s eve on the Coney Island Boardwalk, circa 1941. Picnickers, dog walkers and curiosity seekers peacefully paraded around the perimeter of the bandshell. In my line of vision was a poster promoting Issac Hayes’s July performance at Prospect Park - one of his last. R.I.P. Shaft! “You know you hurt me, you gave it to me, you socked it me mama, when you said goodbye, oh mama, walk on by.” Highway 61 Revisited was muscular; you could hear Stu’s guitar squeal and screech. Netitie Moore was cathartic. I needed to be closer to the Cowboy Band. Summer Days grooved - an amalgamation of all of Dylan’s vocal and musical stylings on this night. With Russian bombs raining down on former Soviet soil, Dylan’s performance of Masters of War was wicked. Resumption of the Cold War loomed in the air, but It’s Alright Ma, it’s life and life only.

Better tardy than not at all, I found out where the cool kids were chillin to Dylan. Up on the hill where the asphalt cuts through the greenery, and the bicyclists and hipsters hang, the music was thundering. The hypnotic flashing neon lights of the NYPD mini jeeps effortlessly danced amidst the towering pines beneath the egg white omelet moon. I should have been in this spot all night. Dylan was deep inside Like a Rolling Stone, 20,000 New Yorkers were in awe, and I was at one with the universe. Thunder on the Mountain was out of control, everything exploded from its essence. Blowin in the Wind was anti-climatic after that one-two punch, but Sweet Jesus, we were in the park, with the Maestro, on a sweatless, starless night in a City Park. Saturday Night at the Borgota beckons. 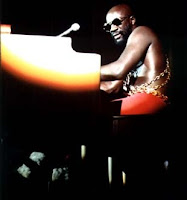