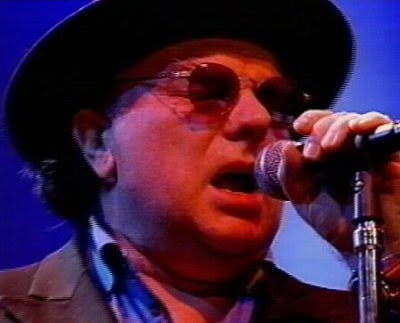 At 3:30 AM on Saturday night/ Sunday Morning, prior to Van Morrison’s concert at the Theatre at MSG, I ran into one of the top cardiologists in New York in an Upper Eastside watering hole. I hadn’t spoken to the good doctor in a couple of months, but knowing his affection for Van the Man, I wasn’t surprised that he, like me, had plucked down $175 for the show. We decided to meet up at Uncle Jack’s Steakhouse for cocktails and a pre show feast consisting of baked clams, crab legs, oysters and porterhouse. After being spoiled by Uncle Jack, it was off to see the surly musical genius from Belfast.

As I was truculently making my way to a seventh row seat, the band, minus Van cranked out the Train Kept a Rollin. I had last seen Van at the same venue sharing a bill with Dylan nine years earlier. As our stocky hero emerged from backstage, he looked like he did in 1998. In fact, he seemed to be wearing the very same buttoned up grey suit and pork-pie hat as he immediately got down to the nitty-gritty with an angry three song assault consisting of Talk is Cheap, I’m Not Feeling It Anymore and Stranded. I think Van was reflecting back to his early days in New York City when he had some rough dealings with big time operators from Bang Records.

I was pumped to hear I’m Not Feeling It Anymore as Van barked out the lyrics like a mad dog. I’ve seen Van six times before, and this concert by far, was his strongest vocal outing. He physically stepped into his singing with the intensity of “Smokin” Joe Frazier unleashing a left hook. All night he was engaged in his distinctive, repetitive scat- style word echoing. If you’ve heard Van live before, you know, you know, youknowyouknow… you know…you know what I'm talking about, it’s got nothing but soul, back street jelly jelly jelly roll. Oblivious to the audience, he was lost in a zone that only immortals like Miles and Dylan escape to. Actually, Van’s gruff demeanor makes Dylan come off like Dick Clark.

Van was blowing saxophone as things began to swing during an upbeat jazzy rendition of the crowd pleasing Have I Told You Lately. The versatile band consisted of two guitarists, drummer, bassist, Hammond pianist, steel pedal player, two multi-instrumentalists, and a pair of female backing singers. The band cooked throughout their 90 minute set, but the demanding Morrison seemed to be chastising his mates on several occasions. Towards the end of the set, he could be heard bellowing at one of the guitarists, “play it fucking steady!”

Van played three songs from his most recent all country release Pay The Devil. I find that 15 track effort banal, but these songs were magic when mixed into his set. He played my three favorite cuts from that CD – There Stands the Glass, Playhouse, and the irresistible Don’t You Make Me High. With the possible exception of Dylan, I’ve never heard any performer pull off such an eclectic mix of American musical styles featuring R&B, soul, jazz, country and pop. It was a little surprising that Morrison decided to not to pursue any compositions that had a powerful Celtic flavor on this night.

Van’s sax playing was impressive during Moondance as a starlit nighttime sky stage backdrop was revealed. It was a plush version that was followed by another one of his best known hits, Wild Night. These numbers fired up the crowd for the big rhythm and blues finale medleys. A smoking Real Real Gone segued into a brief flirtation with Sam Cooke’s You Send Me.

Precious Time, from 1999’s Back On Top was sandwiched by Don’t Stop Crying>Custard Pie and Sonny Boy Williamson’s You Gotta Help Me. It was clear that Van savored playing these classic blues tunes as he continued to impress with the harmonica and sax. The brunette haired lady playing pedal steel guitar was quite talented. You Gotta Help me was the most inspired number of the evening featuring wonderful solos and Van repeatedly singing the phrases, “Put on your nightshirt and your morning gown, “ and “Shake your moneymaker,” before disappearing behind the backstage curtains.

Van remerged with an electric guitar kicking off the last stage of the show with the wonderfully weird And the Healing Has Begun from 1979’s Into the Music. A lengthy mystical rap dominated this number just like earlier during The Philosophers Stone.

A kiddy cookout consisting of Gloria and Brown Eyed finished up the concert much to the crowd’s delight. It absolutely sucked, but I knew it was coming so I wasn’t disappointed. Van’s learned that he has to be a professional and play these songs if he doesn’t want to piss off the paying customers. These were so uninspired it was if Van was saying, “Put this in your pipe and smoke it,” but the crowd didn’t care, they loved it. Dylan gives the crowd Like a Rolling Stone and All Along the Watchtower every night, but those songs are timeless, well played and define who he is. Morrison plays these two early hit songs like they are throwaways, unlike his gripping take on Moondance earlier. I would have gladly traded those two songs in for another arcane Morrison classic like Summertime in England, but when you’re charging $175 for a ticket, even an artist like Van has to make concessions.

Some of the departing concert goers thought Van should have played longer than 90 minutes. I felt the show was brilliant and the good doctor agreed when we met up for post-concert libations at Uncle Jack’s. Knowing that Van mixes his set lists up, we had decided to do it again in Boston the following night as we parted ways. However, Monday morning reality set in and we scrapped those plans. He had to save lives and I had to drop some do re mi off at the bank in preparation for the Bob Dylan summer tour pre sale on Tuesday morning.

Train Kept A Rollin’ without Van
Talk is Cheap
I’m Not Feeling it Anymore
Stranded
Have I Told You Lately
There Stands The Glass
Playhouse
The Philosopher’s Stone
Don’t You Make Me High
I Can’t Stop Loving You
Moondance
Wild Night
Real Real Gone>You Send Me
Don’t Start Crying>Custard Pie
Precious Time
You Gotta Help Me
The Healing Has Begun
Gloria
Brown eyed Girl
at April 30, 2007

I'm writing a book that will feature Van's lyrics and a story of seeing him in Newcastle as part of the 70th Birthday Celebration. I've written to Exile for permission to use lyrics. The whole last chapter of the book will be devoted to Van's music...the way the spirit moves you, and it fills you, fills you, fills you through and through...I think you'll like it. Hope he does, too. I'm confident that he will.