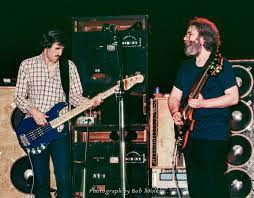 Accompanied by a friend who was also at the 6-16-82 Jerry Garcia Band show at Music Mountain, I returned to the stage where the legendary performance took place on its 40th anniversary. There were seven shows played at Music Mountain over the course of two summers. The final concert there was by Ted Nugent on 9-18-82. Last year I tried to find the Music Mountain site, but I had no luck. This time I had the precise GPS location.

Pulling up behind the stage was a surreal experience. The structure looked like an abandoned barn, and there was nothing identifying what it once was. On the left side of the stage there was an in-ground pool in a state of serious decay. To the right of the stage was the remains of the Avon Lodge, also in a state of advanced decomposition. There’s no reason these structures haven’t been demolished, but that’s Sullivan County for you. Almost all of the legendary Borsch Belt hotels are gone or patiently awaiting their wrecking ball fate.


We headed on to the Music Mountain stage with a cooler full of Modelos, two chairs, a Bose speaker, and a sensational recording of 6-16-82. Adding to the bizarre scene, various items cluttered the sides and back of the stage: a tent, ten-foot basketball hoop, heavy duty tool kit, fridge, patio heater, barbeque, and a dirty table with four dirty chairs. Either the stage had a caretaker, or there’s an owner that comes up here and camps out on rare occasions. There was a birds nest in the rafters, and droppings on the concrete stage below. Our goal was to play the entire Jerry show without being interrupted by locals or law enforcement.

On June 16, 1982, the weather was a hot and muggy take your shirt off affair. On the 40th anniversary the skies were gray, and a light jacket was a good idea. We cracked beers and played air guitar to the show opener, “How Sweet It Is,” at moderate volume levels. How sweet it was to stand where Jerry stood, and look out at the hill that was once upon a time filled with gyrating Deadheads. At least once a year. somebody takes the time to mow the Music Mountain lawn. The grass was low enough so we could go out in the field while the music played and try to revive the vibe of that acid-fueled day. 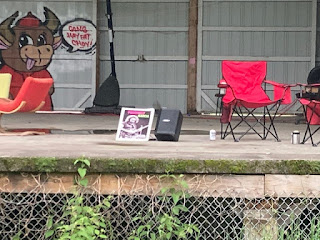 Once we realized that we weren’t disturbing anybody, we cranked the music.  Jerry was in great spirits on that night, thrilled to be playing in the Catskills. Every guitar jam went beyond. The jams in “Catfish John,” “That’s What Love Will Make You Do,” and “Let it Rock” were extraordinary. Jerry crooned like an angel during “Love in the Afternoon” and “The Night They Drove Old Dixie Down.” I was just eighteen the night of the show, and I admit that I didn’t realize how great it was in-the-moment. This show ages better than the finest of wines. In Positively Garcia: Reflections of the JGB, I rated 6-16-82 as the third best Garcia Band show ever. That night monsoon rains swept in before Weir’s band, Bobby & the Midnights took the stage. I didn’t hear much Weir that night, but I recently have heard that show. It’s excellent. I’m guilty of overlooking how good that band was. 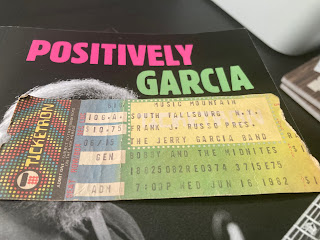 Getting together with a friend to have a few beers and to listen to Music Mountain makes for a pleasurable outing in any setting. Returning to the actual stage in the village of Woodridge in the town of Fallsburg, New York, proved to be as thrilling as I imagined. It was a triumphant pilgrimage to a shrine that was still standing on the 40th anniversary of the greatest Jerry Garcia Band show that I ever saw.  With a modest housing development about two-hundred yards away from the stage, it’s unlikely that this place will ever be revived for live music. Before I left, I took a Positively Garcia posterboard and hung it on the back of the stage—a little reminder that Jerry was here, and the music he created on 6-16-82 is immortal. 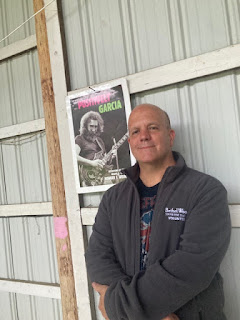 I was also there and I believe most people expected Bobby to come out first so we were in no rush to get in. Once we heard the first notes, we knew Jerry was first and booked as fast as possible. I love these one off shows, outside of Radio City I can't remember when a show was. It was a great show for both bands and man did it pour for Bobby. Did you happen to see JGB at the Chance in Poughkeepsie? Another one off show I remember. Who wouldn't remember an early and late Garcia show at a dump bar.