To finish off the legendary opening set, the Dead unroll a pair of monumental combos, China Cat > I Know You Rider, and NFA > GDTRFB > NFA. The grand last show of the tour, May 26, 1972. Here’s an excerpt from Europe 72 Revisited: The crowd starts to clap out a “NFA” beat and the band obliges them. Why they started to clap at that time is a mystery, but the Dead rewarded the zealous London faithful. Out of this thrilling powerhouse ending to the set, the “Not Fade Away” segue jam is king. With this trifecta out of the mix, the Dead would have to be extra creative in set two.

The Grateful Dead were only warming up with that monumental set. This would have been a beloved concert even if the second set was shorter than usual. Instead, the band let it all hang out, playing close to two hours again while capturing some magical performances for the album. Set two starts with Truckin’ > The Other One. As was always the case in Europe, they managed to make it distinctive.

The 5-26-72 “Truckin’” comprises the two tracks on side five of Europe ‘72, “Truckin’” and “Epilogue.” It’s over eighteen minutes long, and it’s the second rendition from this tour without a chorus reprise; Beat-Club is the other one. The jam pivots towards “The Other One” early as it weaves and swirls between both tunes. Phil strikes the trademark “Other One” blastoff and the band glides forward. Jerry’s licks spray on the canvas like Silly String. The band sidesteps the usual cyclone jamming, and Billy takes over with stunning percussion playing as Jerry noodles below. A hot jam vaguely connected to “The Other One” materializes. Phil and Jerry are merry dance partners as the music streams on and lands in a Billy drum solo. This segment sounds like an improvisational jam from a 1974 Grateful Dead show.

On the other side of drums, Phil blasts off “The Other One” for a second time, and a brief jam leads to the “Spanish Lady” verse. This version is similar yet better than the one from 4-16-72 Aarhus University when they also play mostly on the outskirts of “The Other One.” The ensuing jam in the Lyceum is elegant as it creatively connects “The Other One” to “Morning Dew.” A healthy chunk of this jam forms the “Prelude” track that starts side six of Europe ’72. And what a royal prelude it is!

“Morning Dew” has ascended from a beloved classic to the Holy Grail. There’s an air of religiosity to this magnificent performance: Deadhead nation please stand for our National Anthem while Reverend Garcia and the band walk you out in the morning dew. Garcia’s voice channels deep emotion as he exercises precise artistic control. Stopping time in its tracks is a great phrase used to describe transcendent music. When the Dead are in the zone, no song stops time in its tracks like “Morning Dew.”

The band exhibits their extraordinary powers during the first instrumental as they transition from the silence and stillness of the song to the controlled atomic blast of the jam. Jerry sneaks in a run of screaming exclamation notes before the return to solemn stillness. It’s so quiet you can hear people’s thoughts as Jerry cries out, “I guess it doesn’t matter anyway!” four times.

Textbook execution, escalation, and emotion fill the final jam of the 5-26-72 “Morning Dew.” This was probably the best “Morning Dew” the band played up to this point. There are many hotter and longer “Morning Dew” jams after this night—9-21-72 Philadelphia Spectrum, 9-11-73 Williamsburg, 10-19-73 Oklahoma City, and 9-10-74 London’s Alexandria Palace, just to name a few. However, this Lyceum version on Europe ’72 forever immortalized “Morning Dew” as an essential Grateful Dead anthem.

The final “I guess it doesn’t matter anyway” crashes down in the Lyceum. Out of the smoldering remains, the band reprises “The Other One” for six minutes. This transition is exotic, and there’s more “Other One” meat here than in any other portion of this incredible segment. On its own, this “Other One” doesn’t rank anywhere near the best renditions from this tour, but on this occasion it’s a facilitator, serving the greater overall good of the masterpiece. The 5-26-72 Truckin’ > Other One > Morning Dew > Other One is one of the defining musical segments of the tour. And it’s the only time in Dead history that “The Other One” sandwiches “Morning Dew.”

A soulful crawl through “Sing Me Back Home” is followed by “Me and My Uncle.” This sets the stage for the performance of “Ramble on Rose” that would be included on Europe ’72. In the last set of a four-night stand during a tour which featured twenty-two marathon shows, Jerry delivers his finest vocal performances. I have extreme fondness for this “Ramble on Rose,” which I fell in love with the first time I heard Europe ’72. The band’s playing is sublime. Keith’s piano strokes, licks, and runs transport us to old, weird America. The leader of the band serenades London sweetly with his angelic voice. Jerry has arrived on the scene as one of the great vocalists in the world of music. The Lyceum “Morning Dew” and “Ramble on Rose” confirm that beyond reasonable doubt.

“Sugar Magnolia,” “Casey Jones,” and “One More Saturday Night” are the final three tunes of the tour. Aside from another slightly botched ending to the jam, “Mag” rocks. Out of its role as first-set closer, “Casey Jones” shines. Savoring the sing-along, Jerry and mates deliver the last chorus with gusto nine times: “Driving that train high on cocaine. Casey Jones you better watch your speed. Trouble ahead, trouble behind. And you know that notion just crossed my mind.” A clean romp through “Saturday Night” provides the Dead with one last track for their upcoming album. They really could have used just about any “One More Saturday Night” from this tour for the album. The 4-8-72 Empire Pool “Saturday Night” reigns supreme.

The Grateful Dead family and crew flew back to America. The Bozos and Bolos were no more. They conquered Europe and had all the material they needed for their impending live album. They also had the tapes. Those precious tapes would be released deliberately decades later. The tapes aged finer than the finest of wines and will continue to enthrall Deadheads for eternity. 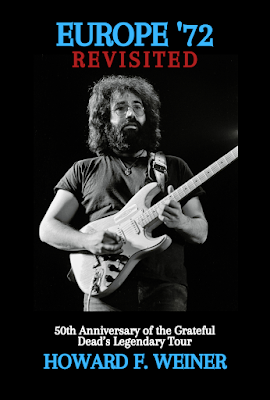