Tangled Up In Tunes Review

This is the review of my memoir which appeared in the Books Upon Your Shelf column in issue 161 of Isis Magazine. I enhanced the text with some photos. 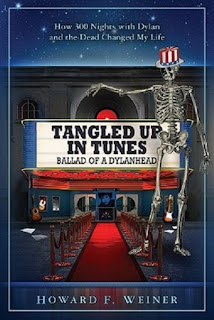 Its been a while since our last books review column, but this month we have four new items to introduce you to. Two of these are already available with two more due in late March and May.


Derek B.
Tangled Up in Tunes: Ballad of a Dylanhead


Howard Weiner's "Tangled Up in Tunes: Ballad of a Dylanhead" is a memoir of a ramblin'  man who  has  followed Jerry Garcia, the Dead, and Bob Dylan for three decades. It's an American road rhapsody that  maybe  should  have  been  titled "Heading for Another Joint". After all, that's where the story ends.
Weiner, or "Catfish" as he's known to his friends, seems to have spent much of his life rambling   around   the   States, sometimes for his job, but more often to attend concerts, firstly to see Jerry Garcia and later Bob Dylan (100 Dylan, and 200 Dead and Jerry Garcia Band shows). The man might ramble but the book certainly doesn't, and I found it to be a good read.
There could maybe have been more analysis or commentary on the concerts- that would have made the book more informative, but probably less easy to read. And anyway, I guess song analysis is not the aim of the book.
Just when he thought his road days were over, Weiner witnessed the horror of 9/11 first-hand from a street corner in Downtown Manhattan. That night he decided to quit his day job and revisit his road-tripping Glory Days; pursuing his muse like never before.
The book opens in 2008 with Weiner in Minneapolis to see Dylan's November 4, Election Day concert. "Dylan's voice was gruff like an old carnival barker at the end of a double shift," Weiner writes. "Either you were drawn to the rumbling or you were repulsed, but everyone listened. Dylan's mysterious web of charisma hypnotized the audience." The book's real beginning starts with Chapter Two, "It's Alright Ma (It's My Life Only)". The best way to provide a flavour of this book is to let Howard Weiner take up the story:-
"I'd been born eighteen days prior to JFK's assassination and given up for adoption immediately," Weiner writes. "My new parents, Lenny and Doris Weiner, picked me up in Cheverly, Maryland, and drove me back to Brooklyn-my first road trip. By the time I was three, my adopted mother had died of an illness on December 31, 1966, and my father and I moved into my grandmother's shoebox apartment on Walton Avenue in the Bronx. My earliest memories, however, are not of grief or longing for my mother, but of the sounds of my father's records ... Infatuated by the soundtrack of West Side Story, I could see the jets and Sharks rumbling on a city playground, and I dreamed of a girl named Maria." 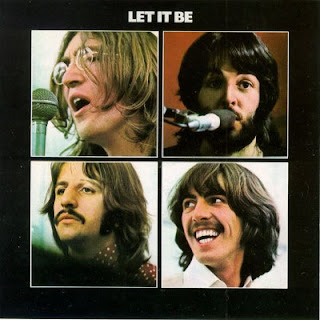 ' ...I was turned on to The Beatles by my teenage cousins, the Baskin boys-Jeffery, Seth and Keith. They lived with my Uncle Murray and Aunt Ruth in a yellow house surrounded by a healthy yard with enormous trees. It was the last home on a dead-end street in Deer Park-an unpretentious high-rise ... I was amazed that they each had their own bedrooms-I was holed up in a single bedroom with Dad and Grandma ... I nagged Dad until he bought me my first two Beatles records: "Let It Be" and a 45rpm single of `All You Need is Love' with `Baby You're a Rich Man' on the fipside. The plastic inserts that had to be placed in the record holes of 45s were funky. Yellow, red, and green, the inserts resembled flattened ship steering wheels with gaps on the outer rim. It was as if their sole purpose was to forever lodge themselves in our memories so we would never forget 45s after they were passe." 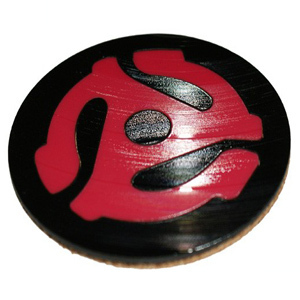 "...Dad remarried, and we relocated ... Weekend road trips with the family became frequent. I didn't ask my parents for much, but I demanded respect; the radio must be playing. Sometimes I successfully negotiated sitting shotgun so I could  scan  the  dial.  Music  and motion became  an intoxicating combo Icould never shake. The names of the bridges and roads sang sweetly like a rhapsody..."
"The first station I tuned into was 66 WNBC New York. Some of the jingles that made an indelible impression upon me were: `Indian Reservation,"Love Train', `Crocodile Rock', `Song Sung Blue', and a song sung nasally-'Lay, lady, lay; lay across my big brass bed.' I was drawn to Dylan's nasally twang, but he didn't receive much exposure on the AM dial. I began to dig more of Zimmy's stuff after receiving an eight-track tape of Dylan's "Greatest Hits Volume II" as part of a larger shipment from Columbia House. Cost? Only 99 cents! Enrolment was a breeze and membership was bliss. Busting open a piggybank? Unnecessary. However, due to a seemingly innocuous stipulation in my relations with Casa De Columbia, I had to purchase seven new albums or tapes at inflated club prices over the next three years. Gotcha, cha-ching! Welcome to the American Dream-fantasize now, pay later, or defer forever. And enjoy those groovy tunes."
By  Chapter Three, "The  Golden Road  (To Unlimited Devotion)", Weiner has been introduced to the guitar playing of one Jerry Garcia:- "Hip to FM ditties like `Casey   Jones' and `Ripple', I used to think of the Grateful Dead as   just another good-time group with a Grate name ... Gripped by  "Europe  '72" the Grateful Dead's triple album, I surrendered my mind to the mysterious sounds. The Dead garnered country, bluegrass, jazz and Delta blues, tossed it in a psychedelic blender, and served it with rock and roll sensibility. These  songs  exuded a strange American presence. No simple label could do them justice. I'd cracked a musical language barrier.
Those with absolutely no interest in the Grateful Dead should be aware that Bob Dylan doesn't arrive in Weiner's story until  Chapter Seven (page 83 of 256). Weiner discovers Dylan quite by accident or, as the chapter's title states, by a "Simple Twist of Fate". It all starts for Weiner when he pushes home a tape in a friend's car. The tape is "Blood On The Tracks":- "I knew an epiphany when I was in the middle of one," writes Weiner. "...I wanted to rewind the tape and absorb what I'd heard so far ... The Dylan switch in my brain was flicked on." Weiner's revelation was superbly timed:- "My universe was perfectly aligned," Weiner continues. "I had found Dylan, and Garcia had bounced back from his coma and was finding his stride again. In May of 1987 it was announced that Dylan and the Dead would tour together again-except, this time, Jerry and the Boys would serve as Dylan's backing band, in addition to playing their own show. I could hardly believe it. Lady Luck was my soul mate." 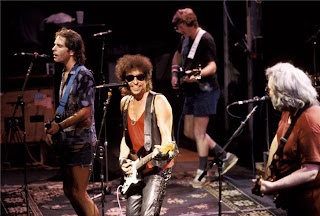 Weiner had this to say about the July  12,1987  East Rutherford concert- "The Giants Stadium concert was an affirmation of my faith in the creative powers of Dylan and Garcia.  Nobody  could  have  grasped  the historical repercussion that this concert would have on Dylan's career, but I knew something was happening. I'd witnessed Dylan busy being born again, his career resuscitated by the Dead, in the swamps of East Rutherford"
After working as a travelling salesman, and moving home for what seems like the hundredth time - always taking his music collection and his three cats along for the ride -Weiner headed back to New York City. It was 1997 and his father and Jerry Garcia had both recently passed away. Weiner got a job selling copiers and rented a duplex in the desirable Yorkville neighbourhood on the Upper East Side. Things were going well until 9/11. Life would never be the same for New Yorkers after those two planes hit their target. The event would   provide the catalyst for a change in Weiner's life:- "I decided to leave my day job," he wrote. "I could better serve the world spreading music, even if it was karaoke." Weiner began spending a great deal of time on the Internet back amongst the Dead community and he very soon "pined for [his] glory days of touring with the Dead". On November 19, 2001, Weiner saw Dylan play at Madison Square Garden. When Dylan sang "'You can't repeat the past. I say, 'You can't? What do you mean, you can't? Of course you can." Weiner saw this as a "call to action". He writes, "My vision wasn't clear, but I knew it involved Dylan's Never Ending Tour and a road map." And so his Dylan road trip was about to start. 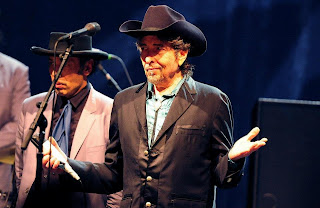 Still living in NYC and working as a karaoke host, Weiner began attending Dylan classes at The New School, New York. The classes, called "Discussing Dylan", were run by my old friend and ISIS subscriber Robert Levinson. In May 2005, near the end of the first Dylan semester, Weiner attended  a  clutch of Dylan concerts. The shows he witnessed were so good that he decided this was it; he was going to write a book about Dylan's Never Ending Tour. "Tangled Up in Tunes" is the result of that notion. However, as I've already stated, the book is not solely about Dylan, as the subtitle "Ballad of a Dylanhead" suggests
In May 2008 Weiner was accepted into The New School MFA Creative Writing program and in 2010 he received his Degree. The story ends on September 1, 2009 in The Joint, Las Vegas, with the author's 100th Dylan show. "It would be a confirmation more than a celebration-a continuum of my existence," writes Weiner. "I love the life I live, and I'm gonna live the life I love. The lights went out and Dylan appeared on stage. "When you're a Jet, you're a Jet all the way...Selah
Howard Weiner  created and hosted the radio show "Visions of Dylan" for WBAI 99.5 FM, New York,2006 - 2008. In 2010, he received an MFA Degree in Creative Writing from The New School, New York. All passages quoted in the above review are used with the permission of the author.
The book, a 6" x 9" Trade Paperback, was self-published by Pencil Hill Publishing on January 6, 2012. It is available direct from www.tangledupintunes.com at $14.00. "Tangled Up in Tunes: Ballad of a Dylanhead" can also be bought from Amazon.com (both  physical  and  Kindle)  and  from
Amazon.co.uk (in Kindle format only). 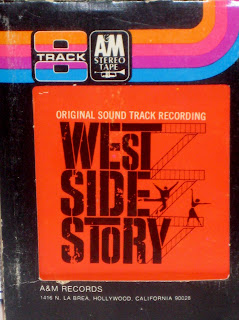