April 6, A Day That Will Live In Epiphany

Excerpts from Tangled Up in Tunes: Ballad of a Dylanhead 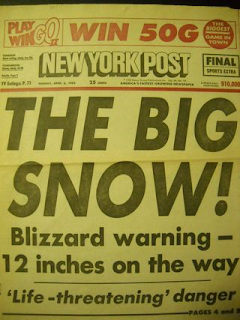 As I awoke in my bedroom, I sensed an unseasonable chill in the air on the morning of April 6, 1982. Opening the drapes, I was stunned by what I saw—marshmallow mounds of snow reflecting the amber glare of the sun. A day earlier, the trees were sprouting leaves, but now they sat like flagpoles on an Alpine ski course. Without much warning, Nanuet was blanketed by eighteen inches of powdery precipitation overnight. The freak blizzard may have delayed the arrival of spring, but it would not deter my plans to see the Grateful Dead in Philadelphia.

I called the Zolottlow brothers to ensure we were pressing on. The vote was unanimous: we would rendezvous with the Dead in Philly. Doug had planned on joining us, but he was stuck in Albany with the April blizzard blues. Waiting at the foot of my driveway with my flannel shirt billowing in the howling Nor’easter winds, I wondered how many hours the 118-mile journey might take. Seymour’s tiny white Honda sputtered up Carnation Drive, appearing smaller than ever in the only partially plowed street, glinting against the wintry landscape. 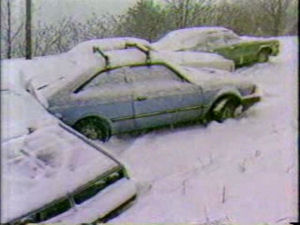 Slip-sliding our way south, Seymour navigated us through a treacherous twenty-mile stretch of the Palisades Parkway. The insanity of traveling in these hazardous conditions was an intense rush. Once we reached the New Jersey Turnpike, all roads ahead were clear. Mother Nature had spared the Garden State—smooth sailing to Philadelphia. I let out a vigorous, “Yeeee-haw!” This was my first road trip anywhere without my parents.

Slicing through the swamps and industrial wastelands of New Jersey, we passed the Oranges (East and West) and the Amboys (Perth and South) on our way to Exit 4, where the Walt Whitman Bridge and the City of Brotherly Love beckoned in the near distance.
Part II: http://visionsofdylan.blogspot.com/2012/02/deadhead-born-this-morning.html 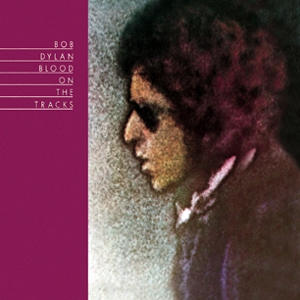 Heading home on Route 32 North, a familiar chord riff flowed gently to my ears. Dylan’s voice interrupted the serenity, “We sat together in the park, as the evening grew dark.” Oh my. This was my first rendezvous with the real “Simple Twist of Fate.” Up to this point, I’d only heard JGB’s unhurried cover. Dylan’s singing was sharp. The words were delivered with an intense poetic cadence. The acoustic accompaniment was spacious and lush at the same time—absolutely hypnotic, like leaves floating from trees. Dylan’s essence filled the car. This version was superior to the JGB version that I was fond of.

The next song had the same mesmerizing qualities of the first two. Dylan’s voice was filled with sorrow: “Oh, I know where I can find you, in somebody’s room. It’s a price I have to pay. You’re a big girl all the way.” Nothing had struck me like this since I discovered the Dead. My life was about to change.

I wanted to rewind the tape and absorb what I’d heard so far, but a wounded Dylan attacked: “Someone’s got it in for me; they’re planting stories in the press.” Each succeeding thought swallowed the previous one in magnitude until the final chorus climaxed with Dylan venting, “You’re an idiot, babe; it’s a wonder that you still know how to breathe.” No Punches were pulled—this was as real as it gets.

The Dylan switch in my brain was flicked on. What about those other albums—albums  that gave birth to “Like a Rolling Stone” and “Mr. Tambourine Man?” There had to be plenty of gold in those mines. I also realized that I’d reached a traffic circle in Kingston, New York, eighteen miles past New Paltz. Phil was probably wondering where I had disappeared to with his car, but I knew he’d be psyched about my epiphany. I rewound the tape and listened to those four brilliant songs on the way back.
www.tangledupintunes.com
at April 06, 2012