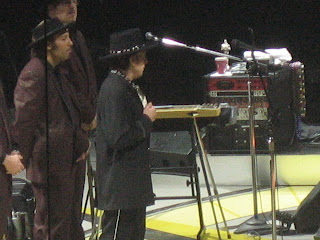 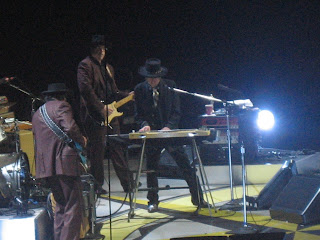 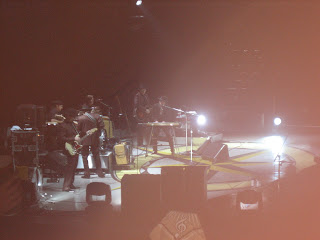 I laughed out loud the first time I listened to the eighth track of Dylan’s new CD Modern Times where Dylan sings, “I’m the oldest son of a crazy man/ I’m in a cowboy band. So this is what I’ve been doing for the past few years – traveling the world to see a cowboy band. However, it’s obvious by the annunciation of the first syllable of cowboy that Dylan isn’t talking about your typical cowboy band. This is a “Caowww-boy Band” consisting of six men with cowboy hats, wearing freshly pressed suits and focusing on nothing but the task at hand. These gentlemen are from another time and place – please excuse them if they don’t say hello goodbye or crack a joke. No other act in the universe remotely sounds or looks like them, if you never seen them before you’d wonder where they parked their UFO. At his disposal, their leader has the greatest collection of original compositions and as good an understanding of American roots music as any performer ever drawing a paycheck for his services. If you’ve seen the “Bob Dylan Show” in the 21st century, you’ve seen a “Caowww-boy Band.”
Of course I’m referring to the song Nettie Moore which is my favorite Dylan song since he penned and recorded Blind Willie Mc Tell in 1983. That might be tough to swallow in a single bite if you take into consideration the gems that Dylan has released since ’83 which include Jokerman, Man in the Long Black Coat, Cat’s in the Well, Highlands and Mississippi just to name a few. I believe this song best captures the essence of who Dylan is in-the-moment. I can feel his presence in the room with me whenever I hear Nettie Moore. I can envision Bob and his Cowboy Band getting busy in the dimly lit Bardavan, an 1869 opera house in Poughkeepsie, New York where Modern Times was conceived. As someone who has seen Dylan in concert 25 times in the past two years, Nettie Moore is the real deal. It’s the most honest snapshot of who Dylan is as an artist and what he sounded like at that particular moment in his distinguished recording career.
The steady thumping beat anchored by Tony Garnier’s bass sounds like a lonely heart pounding. The pacing of the arrangement bears a striking resemblance to Love Sick or recent live versions of It Ain’t Me Babe. Dylan’s booming voice shatters the silence as he introduces the solitary character we come to expect from his songs, “Lost John’s sittin’ on a railroad track/ something’s out of whack.” Dylan’s bewildered annunciation of “something’s out of whack” tells all you need to know. The amalgamation of music and words conveys desolation, desperation, and suspense. One aspect of Dylan’s recent compositions that I like is that he breaks it down to the nitty-gritty and cuts to the bone. Maybe that’s because, as he later states in this ballad, “Got a pile of sins to pay for and I ain’t got time to hide.” We’re seeing the real Bob Dylan at last, as he is in Modern Times.
As Dylan approaches the chorus for the first time he shifts the mood by gently singing, “I’d walk through blazing fire, baby, if I knew you was on the other side.” I’d probably run through a blazing fire, but it’s not as romantic a notion as walking through a blazing fire. Anyway, the line works as a perfect segue as the singer proclaims his love, devotion and yearning for Nettie Moore. The first two lines are lifted word for word from the folk ballad “Gentle Nettie Moore.” Bob’s got no time to hide and nothing to prove, he pastes bits and pieces of America’s forgotten past into his songs as he sees fit. His vocals on this chorus are his finest singing display in a long time. His voice gradually becomes more sentimental and reaches an emotional crescendo as he croons, “I love you then, and ever shall,” and then slowly releases the tension during the remaining chorus, “But there’s no one here left to tell/ The world has gone black before my eyes.” The building and releasing of tension is extraordinary. When I listen, I marvel at how Dylan ended up there and finds his way back - the transitions in and out of the chorus are magical. I have a strong predilection for the verses that follow.

Well, the world of research has gone berserk
Too much paperwork
Albert’s in the graveyard, Frankie’s raising hell
I’m beginning to believe what the scriptures tell

She says, “Look out, daddy, don’t want you to tear your pants
You can get wrecked in this dance.”
They say whisky’ll kill you, but I don’t think it will
I’m ridin’ with you to the top of the hill

Dylan’s dissatisfaction with the technological world is obvious whether it’s the computer age or the television age. Albert’s still dead and Frankie’s out there raising hell is a reference to a traditional number that’s been on Bob’s mind since his early days in Greenwich Village and appeared on his 1992 album As Good As I Been To You. The narrator, who understands the scriptures, is just beginning to believe them. I can’t eat all this stuff in a single bite.
Whenever I hear, “The world of research has gone berserk” and Dylan’s coy follow-up, “Too much paperwork,” I can’t help but think this is a slap at those critics who spend time researching Dylan’s every word so they can accuse him of plagiarism. On his recent works, there’s been a lot of clever lifting of lines from classic blues songs, 19th century poets, the bible, and even a Japanese novelist. It’s out of respect to these artists that Dylan doesn’t alter their words much. He’s not lifting from contemporaries (except for the Japanese fella, can't recall his name) – Dylan’s preserving the sacredness of these precious pieces of the past and turning us on. Everybody should be thanking him, I’m sure Henry Timrod and Robert Johnson would be, though I can’t speak for them. I’m digging this new characteristic of Dylan’s art - he’s the only one out there successfully pulling it off.
The bewilderment of modern times leads our character to start believing in the scriptures. Once again, I’m seeing parallels between the character in Nettie Moore and the song’s creator. Most of us are familiar with some part of Dylan’s spiritual trail – pictures from the Wailing Wall in Jerusalem, the born again Christian albums and the reports of his involvement in different sects of Judaism. In Nettie Moore his belief in God is rock-solid, but he’s still trying to figure it all out. This spiritual journey is something that’s been of interest to his fans throughout most of his career.
Dylan’s still trying to slip bad luck woman and demagogues, but he’s too sexy for his shirt. Another theme that crops up throughout Modern Times is Bob the sex symbol lusting for younger woman like Alicia Keys. In 1965 Dylan sings “Look out kids, you’re gonna get hit,” in Nettie Moore it’s, “Look out, daddy, don’t want you to tear your pants/ You can get wrecked in this dance.” Some have mocked that line, as well as, “I can’t eat all that stuff in a single bite.” Both phrases bring a smile to my face. One of the joys of Modern Times is that Bob lets his guard down. He tosses stuff out there without caution. On the whole album, but especially Nettie Moore, I think we’re getting a real glimpse into Bob Dylan, the man.
I could go on and on, we’re only halfway through, but here’s one last verse that really grabs me:
The judge’s coming in, everybody rise
Lift up your eyes
You can do what you please, you don’t need my advice
‘Fore you call me any dirty names, you’d better think twice
There’s a blast from the past. Dylan is tackling authority that he doesn’t respect in any degree. When I saw him perform this in concert he replaced lift up your eyes with a judge mocking, “All rise.” Who is anyone to be a judge? Some guy in a robe who probably has a closet full of skeletons has the power to do what he pleases. Dylan does a great job of capturing the absurdity of a courtroom scene while poking fun at authority in general.
These are just some of the thoughts that run through my brain as I listen to Nettie Moore. Very few songs in Dylan’s oeuvre provide you the opportunity to absorb what’s happening in them like Ms. Moore. Dylan’s powerful vocals layered over the subdued arrangement let the lyrics resonate. This cat in Nettie Moore is a romantic who travels the world in a cowboy band, is drawn to the lonely underdog, yearns for the past, digs folk tunes and doesn’t trust authority, but believes in God. Thank God Modern Times reached Numer One on the charts in the year 2006. I too, am beginning to believe what the scriptures tell.
By the way, those pictures uptop are from the Philly spectrum 11-18-06. He happened to sing a beautiful Nettie Moore that night, as well as breaking out the Levee for the first time....pictures of Dylan in Philly made my life so wonderful
at January 19, 2007

Man, you nailed this. It is a wonderful song that I don't listen to because it means so much to me that I protect it as if a passed down family treasure. (BTW I never caught the Albert and Frankie reference before!)

Just like Carol, I couldn’t agree more with this EXCELLENT exegesis ;-) One of these rare songs where his voice, his poetry, and his music merge in absolute harmony and beauty (what a chorus indeed!). This song really characterises him profoundly.
Hope he stops believing in the authority of the scriptures though. Not good for his reputation as an anarchist and after all he is far more interesting as a philosophical drifter than as a follower ☺

Great! Off subject ;) Anyone know the make & model of the organ Bob is playing?

Awesome ! One of his best efforts..

We are actively promoting a link to this interesting topic on The Bob Dylan Project at:
http://thebobdylanproject.com/Song/id/440/Nettie-Moore

If you are interested, we are a portal to all the great information related to this topic.