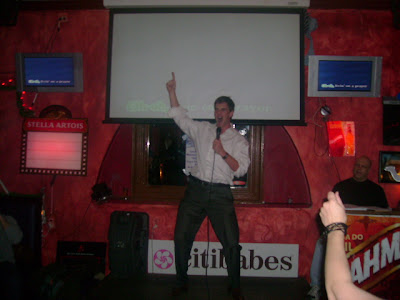 I was stuck hosting a karaoke show at Iggy's between 75th and 76th on Second Ave. on Xmas Eve. - all my employees split town to be with their families. I kicked off the evening with a rousing rendition of Johhny Cash's "Sunday Morning Coming Down" written by Kris Kristofferson. I noticed somebody was filming me with a cam corder. The face of the camreman was so familiar - I soon realized it was Eli Manning, QB of the New York football Giants. That afternoon they suffered a disgraceful 30-7 loss to the New Orleans Saints. It was also the first time I forgot to watch a Giants game since 1978. Anyway, of the 30 or so patrons on hand, only a few identified Eli, and nobody hasseled him, so he hung out for four hours. Above, you can see Eli letting off some steam singing Livin' on a Prayer. Who says this kid has no passion? Look at the way he's stepping into the song. Following in my footsteps, later on he took a stab at Cash's Folsom Prison Blues. Just wait and see, Eli will be the best QB in franchise history. I remember when everbody use to disparage Phil Simms during his first five years.
at January 08, 2007