Part 2: Best Concerts (Based on the twelve I witnessed)

1) 11-16-06…Continental Arena East Rutherford, New Jersey… Bob decided to kick the festivities off with a pair of my favorites, Cats in the Well and Senor. Those are two of his most underrated songs from the underappreciated albums Under the Red Sky and Street Legal. Bob was electric as his arms and legs were flailing all over the place – he looked like a cat getting busy in his litterbox. On a stormy Jersey night, Dylan struck with a kinetic Rollin’ and Tumblin’ setting the stage for the hard-hitting screeds to come.

Positively 4th St. was back to its old viscous self, much different than the sarcastic version from Memphis in April, yet still succulent. I usually fear hearing the apathetic and overplayed new arrangement of It’s Alright Ma, but on the heels of Fourth St. it was a sweet rhapsody. After Dylan hosed the faithful down mid ‘60’s style, he applied a soothing balm with the spanking-new When the Deal Goes Down. Mr. Denny Freeman provided some sparkling Wes Montgomery like leads as the band cooked all night. However, Bob was so commanding, it was hard to focus on anything or anybody else.

In the seventh spot, Bob went Hollywood as he engaged his peeps with Things Have Changed. Something about this Meadowlands Sports Complex gets Bob’s blood boiling. He played Earth – shattering gigs here with the Grateful Dead on 7-12-87 and with his best NET band on 11-13-99. What is it about East Rutherford? This place is an amalgamation of highways, swamps and rancid industrial pollution. For me, this is the birth place of the Never Ending Tour – thanks to Dylan’s amazing breakthrough performance here in 1987 which was easily the best of his mini-tour with Dead. Possibly, Bob gets sentimental thinking about his excursions to see Woody in Jersey back in 1961. Anyway, Dylan was pumped to be performing his Oscar winning song that has become a rare treat. His vocals burst forth with soulful flavor as the band did some call and response improvisation that was scintillating. The out-of-control momentum swept right into the following Simple Twist of Fate that I enthusiastically embraced in my best performances of 2006 rant. These first eight selections from Bob and his Cowboy Band had everything you could possibly want from a night on the town.

Dylan followed a similar script from this tour during his final eight songs. Though there were no surprises, the sustained energy surged throughout. Tangled up in Blue featured a creative harp solo that had the arena buzzing. Two more Modern Times numbers cemented this night as show of the year. Nettie Moore was gripping as Bob lovingly crooned his new classic, vocally exploring every nook and cranny. A romping Thunder on the Mountain prior to Rolling Stone/ Watchtower made the encores much more appetizing on this tour. Cherish the first disc of this show! 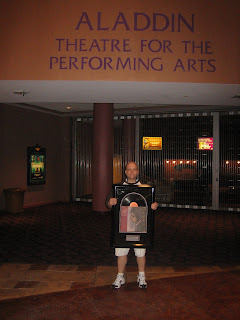 2) 4-07-06 Aladdin Theatre, Las Vegas, Nevada…My first Dylan excursion of 2006 was one I’ll never forget. As I made my way into the Aladdin, I was hoping Bob would mix up his set lists a little bit because the first four evenings of the tour featured almost identical shows. Just observing Bob storm the stage that night, I knew things would change. Perched behind his silver organ, he barely made eye contact with audience as he tended to business like Joe Montana on the day of the big game.

Things Have Changed was served up for the first time as an opener and coupled with The Times They Are A-Changin’. The young revolutionary Bob Dylan came face to face with the more cynical elder statesmen in a timeless display of superb art. Bob’s vocals were authoritative and turned up loud. The fresh sounds emanating from his organ were spooky yet set a carnival like atmosphere. A haunting version of It Ain’t Me Babe in the fourth spot had the hair on the back of my neck standing. Two songs later Dylan pulled off the best Love Sick I had heard since Soy Bomb burst on the scene at the ’98 Grammy Awards. Freeman put an exclamation point on this version with a longer than usually solo that was a touch creepy. The first half of this show could work in a soundtrack of a stalker movie.

Down the home stretch Bob played Ballad of a Thin Man and I Don’t Believe You side by side, just like he did 40 years earlier in Europe. I was pleased to see the fascinating new arrangement of Cold Irons Bound that was unleashed on Vegas. The thrashing version from recent tours was decompressed without lessening the song’s impact. Anything was possible – the entire twelve song set was different from the previous night and eleven songs were making their tour debuts. Cat’s in the Well was another shock to the senses in its role as set ender. Bob howled, “Goodnight my love/ May the Lord have Mercy on us all” and then just disappeared into the darkness. He came back for the typical encores, but my head was still spinning from that 12 song presentation. The performances were above average throughout, but it was the audacity of Dylan’s performance that touched me. On this night he was a disturber of the peace – that scores big points with yours truly.

3) We have a tie…4-24-06 The Orpheum Theatre Memphis, Tennessee and 8-27-06 Manchester, New Hemisphere…Dylan’s first tour of ‘06 featured three distinct set lists with each one only varying by a song or two on a nightly basis. The most commonly played show was the one that started with Maggie’s Farm and was followed by a revamped She Belongs to Me. The Memphis show on April 24 was the best performed of these typical Maggie’s Farm shows with two awe-inspiring differences.

Believe it or not, the Maggie’s Farm was a standout performance. Dylan’s swirling organ sound gave this overplayed war horse a psychedelic vibe. Freeman nailed two succinct guitar jams paving the way for She Belongs to Me which featured Dylan’s new vocal inflections (down – singing). All of these versions I’ve heard from April and May are worthy of high praise. Fine renditions of Queen Jane Approximately and the overhauled Till I Fell in Love with You kept things moving in the right direction.

As described in my Best Performances of 2006 screed, the Positively 4th St. was larger-than-life, one of the most memorable moments of the Never Ending Tour for me. A herky-jerky adventure down Highway 61 ensued. Dylan’s organ sounded like a steaming teapot as the band drastically altered the volume and tempo of the song with incredible skill. Dylan landed the knockout blow with his eleventh song by playing the only A Hard Rain’s A-Gonna Fall of the tour. Hearing those lyrics flow in that grand venue in the historic city of Memphis was heavenly. The next evening in Memphis had a more desirable set list, but after consulting the audio tapes, 4-24-06 takes third place.

8-27-06 Manchester, New Hemisphere…I was beginning to get weary of these Summer Tours in Minor League Ballparks. Three consecutive summers of fighting through general admission crowds consisting of local yokels was dampening my spirits. The only thing to dampen me in Manchester was the steady rain that increased in intensity by the hour. I stayed at the hotel which was part of the ballpark. A Major League hitter jacked up on steroids could have easily launched a tater through my window. After staying dry with college friends at the hotel, I ponied-up for a $40 long-sleeve Dylan shirt and a three dollar poncho. I can’t recall the last time I stood in torrential rains for an entire concert, but this turned out to be an unexpected pleasure.

The rains scared off many paying customers. Towards the end of the show just an intimate gathering of 1000 screwballs were huddled around the stage. Instead of being disappointed by the meek turnout, Dylan paid homage to us. The ceremony began with a Cat’s in the Well/ You Ain’t Going Nowhere salute. I have a perverse predilection for that feline tune. As things progressed, we joined Dylan for a Just Like a Woman sing-a-long. If it wasn’t pouring so damn hard we could have started a campfire and had a marshmallow roast. Adding to the surreal scenery, planes from the nearby airport would occasionally emerge from a cloud hovering over the stage. The highlight of the set was a poignant A Hard Rain’s A-Gonna Fall. Of the 12 shows I saw, I was lucky to catch two Hard Rains. Dylan was incredibly animated shooting pistol salutes at the giddy crowd that remained. A night of fiery performances was topped off by a hilarious gesture from Dylan. As the band lined up behind their leader to receive their final ovation, Bob removed his ten gallon hat and pretended to pull out some kind of magic dust or seeds and feinted sprinkling them on the audience. Dylan, the band, and his followers were smiling ear to ear. Johnny Appleseed strikes again! 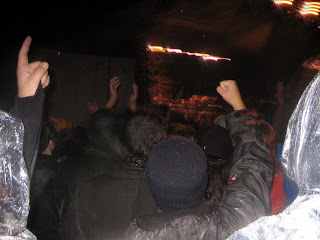 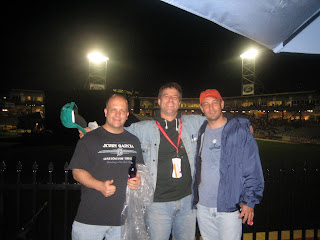