Tangled Up in JGB 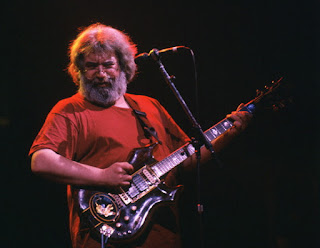 During a savage eight-day stretch in the spring of 1983, I saw ten Jerry Garcia Band shows. After rocking past the midnight hour, my companions and I drove back home every night. I was a twenty-year-old squatter in my folks’ house, but they didn’t seem to mind. Living on the road is hard traveling. Truckin’ back to your parents’ house after every gig is pure lunacy.
My descent into JGB madness began at the Bushnell Auditorium in Hartford, Connecticut on May 29. The following night, we were back at the Bushnell, courtesy of Doug, who was driving his mom's yellow Coup de Ville Cadillac. We were joined by Bob the pirate, who was now known as “No Name Bob,” a nickname he earned after he lent Doug a batch of sloppy boots: songs were misidentified, misspelled, and listed out of order, performance dates were incorrect, vague, or nonexistent. “No Name Bob” was born.
The prospects seemed bleak for our ticketless trio. Saturday night, desperation and depression deepened around the Bushnell. There were no scalpers in sight—just Deadheads praying for the elusive miracle ticket. Suddenly, a door on the side of the theatre swung open. There stood a smiling freak, and behind him, a stairway to ecstasy. A bunch of us scampered up the carpeted steps like rats making a late-night raid on Taco Bell. Presto! We were dancing in the Bushnell balcony as Jerry ripped into “Mystery Train.” Doug charged into a high-stepping, elbow-flapping polka dance. Nobody loves a “Mystery Train” bound for glory more than Doug. “No Name Bob” smirked in admiration, for he’d never had the pleasure of witnessing Doug under Jerry’s spell. 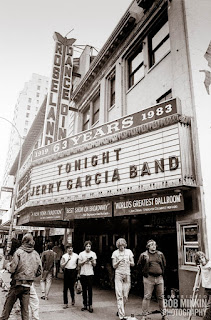 The Bushnell shows whetted my appetite for the next tour destination—Jerry off-Broadway. Anticipation boiled inside the Roseland Ballroom. On the last day of May, New York City was juiced for a heaping dose of Garcia. Smoke billowed through the ballroom—that exotic, aromatic mix of hash, ganja and cigarettes. A huddled mass of hippies gathered close to the stage. The spacious ballroom floor was surrounded by carpeted walkways and lobbies, and long, sleek bars from which there was a golden glimpse of the stage. Wherever one lingered or roamed, cocktail access was a cinch.
The Bearded One appeared on stage in a red T-shirt instead of his customary black—Summertime Santa. Garcia’s belly expansion was obvious, bordering on obscene. He seemed to be adding ten pounds to his overburdened torso per tour. Melvin Seals, and the new backup singers Dee Dee Dickerson and Jacklyn La Branch were super-sized as well. This was a band that preferred a Grand Slam breakfast at Denny’s over an aerobic session in Gold’s Gym. 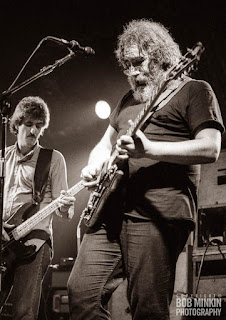 Jerry set sail with “Rhapsody in Red,” its rhythm and chord structure similar to “Let It Rock,” its slick jazz lick jutting free—a deedle dee dee, a deedle dee diedle… a deedle dee dee, a deedle dee diedle. Brightness vibrated from the furious jam, ideas exploding inside a rhythm and blues container. Fortified by funky organ-grinding, “They Love Each Other” playfully bounced in the second spot. Garcia ignited a two-tier jam: round one, a reconnaissance mission; round two, a searing solo that had the cosmopolitan hipsters howling their approval. Garcia was en fuego, and his boisterous devotees knew it. Matters of the heart ruled this set. Garcia blew the roof off the Roseland with diabolical fret work during “That’s What Love Will Make You Do.” The remainder of the gig was easy like Sunday morning, featuring a “Mississippi Moon” that made bikers weep. Jerry’s tone was angelic:
“Honey, lay down bee-side meeeee; angels rock us to sleeeep.”
I reconvened with Doug at the Roseland bar after the show. The NBA Finals flashed on a TV that dangled down by the single malt scotches. Doug’s favorite athlete, Philadelphia 76ers Dr. J, was about to bury the Lakers. Dribbling near the right baseline, the Doctor charged to the basket and soared to the sky. Laker defenders guarded the hoop, forcing the airborne doctor behind the basket. Defying the laws of gravity and comprehension, Julius reappeared on the other side of the basket. And, with a casual flip of the wrist, the ball rolled from his fingertips, kissed the backboard and swished into the net—apple pie à la mode—impossible, but true. Philly had won the NBA Championship. Mere moments after “The Drive,” a gaggle of security guards had to break up a ruckus between two lanky, but rather violent, hippies, and a few of their associates. The gladiators left behind a trail of blood. It was a grotesque conclusion to a righteous evening.
Back in the black T-shirt for night two of the Roseland rendezvous, Garcia crooned his mission statement: “I’ll take a melody and see what I can do about it; I’ll take a simple C to G and feel brand new about it.” During “The Harder They Come,” it felt like I was being checked into the boards of a hockey rink. The temperament of the performance reflected the international chaos of the times. Soviet-American tensions were peaking, Central America was a cauldron of revolution (who can ever forget the Sandinistas?), and the Middle East was the Middle East—no peace.
“Gomorrah,” was an appropriate choice for a Hell’s Kitchen dance floor brimming with whacked-out freaks gyrating to JGB—let the depravity and debauchery run wild. Neighborhoods west of the Roseland were being terrorized by sadistic Irish mobsters. The Westies instilled fear by ruthlessly chopping up their lifeless victims and stuffing them in Hefty bags before depositing them in the East River. Pimps, hustlers, whores and dealers saturated Times Square, and squadrons of desperados loitered around the neon-lit sex shops. When Jerry sang, “Blew the city off the map, nothing left but fire,” it sure sounded like prophecy. And, to some extent, it was. The West Side of Manhattan circa 1983 has been eviscerated. There’s nothing left but clean-cut capitalism and grimy greed.

In the second half of the show, Garcia bullied four epic songs. If there was a gadget that could tally guitar notes played per minute, the device would have blown up. “Don’t Let Go” featured a twenty-minute instrumental during which I chain-smoked three Marlboros. Gripping and terrifying, it was commensurate to navigating through turbulent oceans on a starless night. Edgar Allan Poe would have approved. It was a dark and stormy night, wasn’t it? 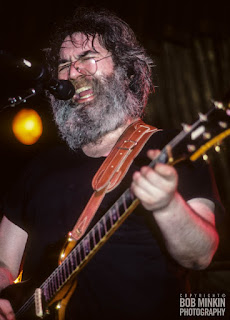 The crowd rejoiced for “Dear Prudence.” It came off as a tribute to Lennon because we were only two and a half years, and less than one mile, away from where John inhaled his last earthly breath. Garcia was the transformer, exploring layer after layer of a tune that’s simply fetching, and quite strange in an elegant way. The solo was outstanding, landing just short of the great Cape Cod “Prudence” three nights earlier. “Deal” was a bloodbath! Garcia sang the song as if he was discarding a bag of chicken bones, but the jam was an act of acrimonious aggression. Garcia’s notes swarmed like agitated hornets around the Jack Hammer bass and raging drums. When the set was over, it felt like the Roseland had been ransacked and simultaneously healed—a mass exorcism. With polarizing performances on successive nights, Jerry’s mosaic art mirrored the passion and heat out on the streets of Manhattan.
Even the Lord needed a day of rest, and so did JGB and the nuts that followed them.

The tour resumed in Passaic, New Jersey, on June 3, 1983. While I was sucking brew out of a pint in a seedy watering hole by the Capitol Theatre, a vaguely familiar face approached and asked me if I needed doses. I wasn’t in the market, but Doug was. The freewheeling acid guy, who I think I knew from community college, looked like the Court Jester of Passaic, with his three-pronged joker hat and tie-dye sweatpants. He handed me a vial of LSD and instructed me to dose my buddy in the bathroom, $5 per drop. In the stall, I handed Doug the vial. He proceeded to dispense three or four drops on his outstretched tongue. Things were going to get real weird, real quick.
The healthy crimson hue vanished from Doug’s mug. Beads of sweat rolled down his pale cheeks. Probing waves of the mega-dose zapped his brain and rattled his eyes. We fled the bar and stood on the street corner. Doug’s arms and legs flailed wildly as he babbled gibberish. As nightfall descended upon Passaic, we had issues. How was I going to explain this to his dad, Herb? When Doug jumped into my Chevy that afternoon his future was bound for glory. The pride and joy of the his clan, Doug was the heir apparent to his father’s law practice. I had great respect for Herb and his wife Gloria. Though Herb never touched a drink or smoked, he had a zany wit and a fiery passion for life, which he had passed on to Doug. Herb also had a terrible temper; I could never explain to the old man why his son was being returned home a comatose vegetable, unfit to tie his own shoes.
My other concern was the nature of the environment we found ourselves in. Nighttime in Passaic was not conducive to psychotic episodes. What type of city was Passaic in the early ‘80s? The summer before, I’d pulled into Passaic for a JGB gig and found a spot a few blocks from the Capitol. Prior to parallel parking, I discharged Laurie and Tracy, hippie goddesses, from my maroon Caprice and told them to meet me in front of the Cap. A cop stopped the ladies, asked me to roll down my window and hollered, “What? Are you fuckin’ nuts? Letting theeeese girls walk by themselves, in this neighborhood!? Are you fuckin’ nuts?!? And if you don’t move your car, you’ll be lucky to have a fuckin’ steering wheel left!”
So, there I was, on the hostile asphalt of Passaic, trying to find a sanctuary to nurse Doug back to sanity. I tried to lure Doug into the theatre, but his heart was pounding for the emergency room. After the ER doctor examined Doug, he assured us we had nothing to fear but fear itself. The good doc went back to treating emergency room causalities. We went to see the Captain. 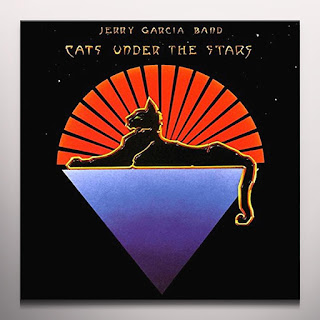 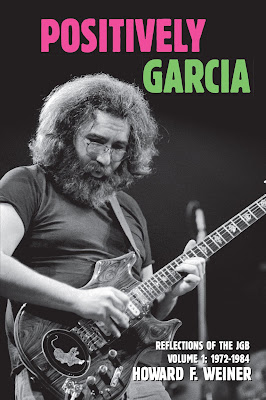 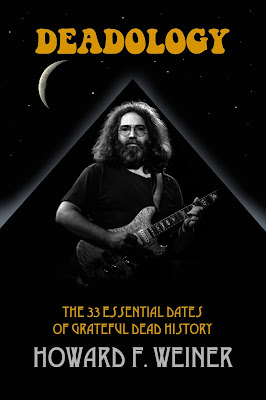