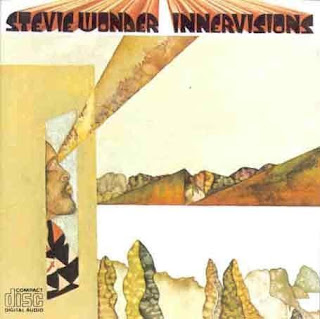 INNERVISIONS
Stevie Wonder: MSG 11-17-07
This concert almost slipped under my radar. At first I decided to pass on expensive tickets for this, but fate interjected. It was brought to my attention the day before the concert that Wonder was ripping off some succulent set lists featuring his best 70’s material. I had to go. Innervisions is one of the greatest albums ever, that whole string of recordings starting with Music of My Mind and ending with Songs in the Key of Life is genius. The concert was sold out, I kept checking with Ticketbastard on the day of the show until they finally released some tickets. I pounced on a 15th row seat.
Waiting inside of MSG, I thought of all the great times: Dylan’s two brilliant shows from 2002, my first Grateful Dead show on 3-9-81, St. Stephen 10-11-83, Help>Slipknot>Franklin’s 10-12-83, Watchtower> Morning Dew 9-18-87, Dire Straits ’85, McCartney ’89, Rowan hitting that baseline jumper at the buzzer as St. John’s with Mark Jackson, Walter “The Truth” Berry and Louie “the Sweater” beat Syracuse with Pearl Washington, Derrick Coleman and Jim” The accountant” 70-69 to win the Big East Tournament.
I’ve digressed. Stevie’s daughter Aiesha led Stevie out for a ten minute address including a moment of silence for the 9/11 victims. He was psyched to be in New York and kicked things off with “Love’s in Need of Love Today.” His vocals were as radiant, soulful and as overpowering as you would expect. Then the man jumps into Innervisions with the album’s opener “Too High” as cool psychedelic lighting wobbled off the stage backdrop. "Visions" was incredible, he adlibbed a long ending that was boring politically, but sizzled musically. The cat has won 753 Grammy Awards. He does as he pleases.
A truncated “Living For the City” pumped up the crowd before the reggae party started with “Master Blaster.” It all sounded so amazing, he should tour more frequently. There was some kind of impromptu messing around with effects like Peter Frampton did on” Do You Feel Like We Do” for ten entertaining minutes. Then Stevie walloped us with “Higher Ground” and “Golden Lady.” What a night, I never imagined I would see Stevie on top of his game playing these tunes.
A long "Ribbon in the Sky" with an extended audience sing along portion killed the artistic flow. I felt like I was at a Broadway play as he followed with four more slow ballads. It was a nice strategic move as he sandwiched the stuff I didn’t want to hear into one segment before rebuilding the momentum. Wonder brought it all the way back to the 60’s with a pulsating “Signed Sealed Delivered” that rocked the crowd, following it with a country tinged spoof of the same song. A little minstrelsy. Then Stevie shared an innocent teenage romance story which was the inspiration for his next song, “My Cherie Amour.” He rounded out his 60’s flashback with “For Once in my Life” before bringing the music to a halt, and bringing out his mother’s favorite singer Tony Bennett to finish the song with him. The crazed ovation for Tony shook the Garden.
I’m not sure this is the exact order, but we heard great versions of “Don’t You Worry ‘Bout a Thing” and “Boogie on Reggae Woman.” During “Boogie,” a guest harmonica player came out, and he and Stevie harped away on an intense dueling solo. I believe “Superstition” was next as Stevie called out Prince to join him. Prince tore into some nice leads; it was exciting for the crowd. I think Prince is weird – I don’t really get the infatuation with him. “You Are the Sunshine of My Life” was cool – one of the first songs I heard when I started listening to AM radio as a kid. “Sir Duke” and “I Wish” are fantastic songs that I was thrilled to hear, but to be honest, Stevie blew through them in medley style. Big mistake! Those songs are too spectacular to treat like that. There was another song or two and the whole thing was over, no encore. The two and a half hour spectacular was well worth the $180 I shelled out. Hot Dang! I can’t believe I saw Stevie Wonder play almost the entire Innervisions album last night. Yippee!
at November 18, 2007