9-15-82 Cap Centre was my eleventh Dead show. Earlier in the year I was fortunate to see the spectacular 4-6-82 Philly and 8-7-82 Alpine shows. The Cap Centre was not as consistently hot as those shows, but it was every bit as thrilling in the moment. When the Dead opened the evening with Playin’ in the Band, it blew me away. At the time I thought it was a first, but now I know of at least two other times they had done it. The segue into Crazy Fingers sent me into a state of delirium. It was my first time seeing this tune as it was the Dead’s first East Coast Fingers in six years.

The Fingers outro spins into a Playin’ jam. This would be the thematic statement of the show as the Dead would return to Playin without finishing it two more times. The first Dupree’s Diamond in the East Coat in four years added to the improbable luster of this show. Another Playin jam filled the space between It Must Have Been the Roses and a killer Let it Grow. My first Day Job ended the set. Ironically, I drove back to New York that evening/morning, dropped my friends off, microwaved a serving of frozen pancakes and sausages, and went straight to my day job working at Ramapo Seafood Warehouse. Is it any wonder that I was almost knocked out when a ten pound block of frozen shrimp landed on my head in the freezer? 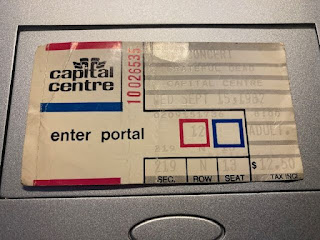 Another Playin jam connects the second set Shakedown opener with Sailor > Saint. It’s a noteworthy Sailor > Saint that appears in my latest book, Deadology Volume II. On the other side of Drums, there’s a unique Not Fade Away and a killer Stella outro jam. Capping off this wonderful night in Landover, the Grateful Dead debuted Touch of Grey in the encore slot.

8-31-80 Capital Centre, Landover, MD: The Dead celebrate the anniversary of the first Sailor > Saint with a gripping and flawless performance in Landover. This time, Weir’s duo is sandwiched by other combos. Here’s the alluring pre-Drums lineup to start set two: Greatest Story Ever Told > Uncle John’s Band > Lost Sailor > Saint of Circumstance > Comes a Time > Truckin’. One of the most underrated Dead tours is this late-summer 1980 East Coast rendezvous. “Sailor” is delivered with a drifting/dreaming feel. Garcia’s guitar licks ascend to a fiery peak as “Sailor” closes in on “Saint.” The band channels their rock and roll desires into a perfectly constructed “Saint” jam. The Dead push the boundaries of Sailor > Saint, yet the performance is delightfully smooth—album-worthy. The mojo generated here spills over into an elite pairing of Comes a Time > Truckin’.

9-27-81 Capital Centre, Landover, MD: Let’s call this the second birthday bash for Sailor > Saint at The Cap. This time Sailor > Saint closes the first set, and it is the star of the show. It’s a quality version all the way through, but oh my, that “Saint” jam boils and explodes! Phil and Jerry square off and create a rolling crescendo of fire. It’s a stunning example of how the band can improbably extend a peaking jam when it doesn’t seem logical. Even though Sailor > Saint was bound for regular pre-Drum duty in set two, it proved that it had the gravitas to close out a set.

9-15-82 Capital Centre, Landover, MD: After writing the first draft of this book, I decided I needed one more Sailor > Saint. Without considering that I already had two versions from the Cap Centre, I sampled several new renditions and came across this show that I had attended. Is this merely a coincidence, or is the “Seems like I’ve been here before” theory back in effect? Is it possible that the band recalled their past “Saint” accomplishments in this building, or were the ghosts of hot “Saint” jams swirling and influencing the proceedings on 9-15-82? This show opened with “Playin’ in the Band.” Although the “Playin’” loop was never closed, “Playin’” noodling popped up here and there throughout both sets. After set two opens with “Shakedown Street,” the band messes with “Playin’” space before settling into Sailor > Saint. The band loses their mind during the “Saint” jam. The drummers spike the instrumental early with hyped pacing. Jerry explodes. Patience be damned! Garcia locks into fiery repetition to keep Weir at bay and keep the jam alive. The band improbably rides the crescendo. This may have been the hottest “Saint” jam of the three from the Cap Centre. Bobby’s a rhyming maven down the homestretch. Before they transition to Drums, Garcia leaves burn marks with his final “Saint” licks. 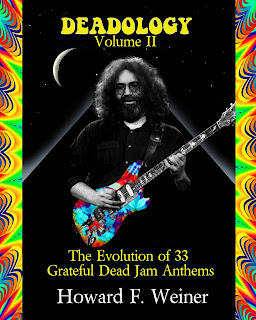