Jack Straw may be from Wichita, but the hottest “Jack Straw” is from Syracuse on 10-20-84. On this date in 1974, the Grateful Dead bid farewell to touring for a year and a half with an epic three-set blowout in the Winterland. I’ll save that for last and begin with the Syracuse “Straw,” a performance so astounding that it dominates a strong concert that ended a rousing East Coast tour. 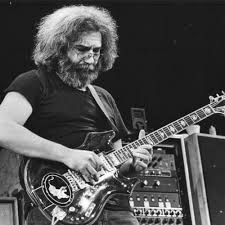 I wasn’t there, and that fact haunts me every time I listen to the Syracuse “Straw,” although I’ve worshipped this version from the first time I heard it. The Carrier Dome in Syracuse was the final stop on the Dead’s East Coast tour for the third year in a row. I knew 10-20-84 was bound for glory. I had caught all ten previous shows on tour ’84 and I was disappointed with the song selection at the last Brendan Byrne gig. On Saturday, October 20, 1984, I attended my brother’s bar mitzvah somewhere in New Jersey, but my heart was in Syracuse.

The Carrier Dome, an indoor stadium with an inflatable roof, was opened in 1980. Its main purpose was to serve as a stadium for the Syracuse Orange football and basketball teams. It also became a major tour stop for concerts, although, based on my experiences there, it was far from being an optimal venue for a Grateful Dead show. Bertha > Greatest Story Ever Told opened the festivities on 10-20-84. The music was up-tempo and edgy, but there were no hints of the madness to come early on.
Effectively altering his guitar tone with a Mu-Tron III envelope filter, Garcia rips a unique “Ramble on Rose” solo during the fifth song of the set. And then Weir implores the crowd to take a step back. The fire marshal was threatening to shut the show down due to the overcrowding near the stage. This was temporarily bad news for those being smashed up front, but spectacular news for those who craved transcendent jams. On several occasions in 1977, the Dead encouraged their eager fans to take a step back, and these masterpieces ensued: 5-8-77 Scarlet > Fire (Cornell), 9-3-77 Mississippi Half-Step (Englishtown), and 11-5-77 Mississippi Half-Step (Rochester). The other common dominator here is the rabid East Coast fan factor.
The next tune for Syracuse is a fine performance of “Brother Esau.” There’s no transcendence there, but the ensuing “Birdsong” touches off the magic. The drummers strike an up-tempo, jazzy beat as Phil’s bass dances in the shadows and Jerry’s axe shreds and shrieks a tune so sweet—Grateful Fusion. Due to my obsession with this “Straw,” I previously overlooked this searing gem.
After “Birdsong” lands, Garcia’s restless fingers suggest “Jack Straw.” The opening licks sound like they could slice and puncture. The budding momentum is staggering as Weir howls, “Cut down a man in cold blood, Shannon. Might as well be me…Me!!!” Bone-crunching bass blasts are met with furious guitar strumming. The essence of the Jack Straw character firmly takes hold of Weir as he venomously hollers, “One’s for sport and one’s for blood at the point of a knife! Now the die is shaken. Now the die must fall!” As the song settles into the “Fourth day of July” verse, the upcoming rampage is palpable. Anyone with an ear for the Dead knows they’re about to witness something unforgettable.
Weir ignites the final assault: “You keep us on the runnnn, RUN!” A Lesh bomb that would have collapsed a smaller venue sets Garcia on the warpath. The licks are coming fast and furious as Jerry changes flow by adjusting a few knobs without interfering with the forward thrust. This is a group exorcism as they bash away in unison—physically letting it all hang out. Compressed and controlled pandemonium fills the dome. Jerry Bond 007 blazes away and creates a new guitar language. My friends told me that Jerry leaped in the air during this jam. I think I hear the thud at the 5:47 mark. Ho, ho, ho! There’s no traditional chord fanning as the band has passed the point of no return, and somehow, Jerry keeps the mojo rollin’. Phil’s relentless bass bombs set off seismograph detectors in central New York. This could be the most explosive and primal jam in Dead history. If you pick this “Straw” up mid-stream, it doesn’t sound like the Dead—or any other band. All the anger and evil inherit in the song is unleashed, and the effect on the listeners is cathartic and euphoric as it all rolls back to the starting point: We can share the women we can share the wine.
“We’re going to take a short break. Everybody move back,” says Weir, as if he’s Jack Straw and he’s still pissed-off. The Carrier Dome, which is louder than most indoor stadiums, is deafening. I can only imagine how ecstatic I would have been if I was there. There’s nothing I love more than a crazed “Jack Straw.” Instead, I was dancing the hora and listening to the Murray Fields Band. Goddamn it! I should have been there. With all the hard traveling and touring I put in, I earned that Syracuse “Straw.” 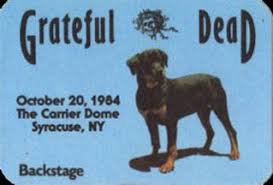 Riding the “Straw” high, the Dead stormed into set two with “Shakedown Street.” Billy and Mickey are pounding percussion devils on this evening. This version’s a cannonball blast that maintains its funkiness. There’s no fiddle-faddle as Jerry steams into the big jam. A volatile “Samson and Delilah” feeds off the “Shakedown” fury. Finally, the Dead return to normal planetary orbit with He’s Gone > Smokestack Lightning. This is the same combo they played in Worcester on 10-9-84. The Worcester performance is pure heart, soul, and spirit. In comparison, the Syracuse combo is merely adequate.
The Dead weren’t finished with Syracuse on 10-20-84. After Drums, they reeled off a lively Wheel > Other One > Black Peter > Lovelight finale. Jerry sang a spirited “Black Peter,” and the outro segued into a captivating “Lovelight.” There was attentive soloing and noodling from Jerry throughout. On his final go-round, Bobby tried to channel some Pigpen mojo, and then decided to bring it on home like the Bobby Blue Band: “Feel alright, feel alright, let your lovelight shine, girl. Owww! Feel alright, feel alright…Owww!” Jerry hits dramatic licks as the band crunches a perfect ending and Bobby chimes in with a final, “Feel alright!” This “Lovelight” is a thriller. Syracuse received “Revolution” for dessert. 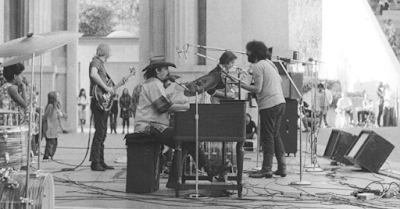 Perhaps the Syracuse “Straw” was influenced by flashbacks to the anniversary of the Dead’s 10-20-68 Greek Theatre gig. That performance is a stream of pure heat, start to finish. “Good Morning Little School Girl” set the tone for the show in the opening slot. It’s uncompromising, grungy, and loud. Jerry and Phil are challenging each other and creating at the same time. Bass and electric guitar leads comingle in breathtaking fashion. This is a contender for best “School Girl.” Pigpen has the machismo rolling as he follows by belting out, “Turn on Your Lovelight.” Their approach and style was eccentric, but the Dead could rock as hard as any band on certain nights in ’68.
Garcia has always seemed to have a sense for when not to play, but on this night, his creative instincts surge into overdrive. “Dark Star” takes off like a comet speeding through galaxies. The band’s possessed as they bolt into “St. Stephen.” The song structure can barely contain the psychedelic strikes, and the release into “The Eleven” is divine. Finally, they’ve run into a song with an ideal tempo and flexibility for their intensity level. The Eleven > Caution handoff is flawless. And “Caution” is probably the hottest jam of this blunt yet rambunctious affair. Every second of 10-20-68 is primal Dead. 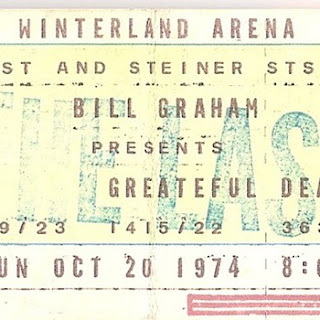 “The Last One” in the Winterland commences with “Cold Rain and Snow,” a striking performance that serves as the opening track of Steal Your Face. In the brief period before I began to collect bootleg tapes, I was obsessed with this version. The next enchanting performance of 10-20-74 comes in the sixth slot with “Jack Straw.” Jerry’s picking and pecking all the way through, and there’s nice extension in the jam. There’s loud applause as “Straw” touches down. This is the best version to date, and the potential for “Straw” would be realized when “Jack” was returned to the rotation in May ’77. Although nobody could have imagined anything like the obscene Syracuse “Straw” on the tenth anniversary of this Winterland show.
Before a major presentation of Cat > Rider, Garcia sings, “Fare you well my honey.” It’s a rare and fitting placement for “Brokedown Palace,” which would settle into the encore slot when the Long Strange Trip continued. In addition to bidding farewell to touring and their fans, this was the end of a golden era for China Cat > I Know You Rider. It wouldn’t be played again until December 29, 1977 in the Winterland. On 10-20-74, we get the last extended “Cat” jam with the “Feeling Groovy” movement. Garcia does a nice job delaying the “Feelin’ Groovy” surge with a series of dramatic repetitive licks. Set one comes to a reelin’ and rockin’ conclusion with the Steal Your Face “Around and Around.”
The audio of this show has a strange drum reverb that sounds like a sneaker thumping around in a dryer. It’s ironic that Mike Hart joined the band in set two because the sneaker in the dryer analogy has been used to describe the Dead’s two-drummer sound at times. Set two is a synchronized loop: Playin’ in the Band > Drums > Not Fade Away > Drums > The Other One > Wharf Rat > Playin’ in the Band. Within the loop there are few jaw-dropping moments, yet it’s a unique and balanced display of subdued virtuosity. 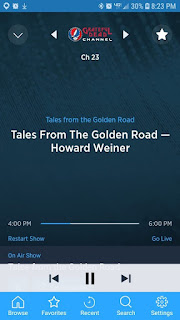 Set three, the strangest of sets, starts with the first “Good Lovin’” without Pigpen. The band is having a blast. Weir is carving out a niche as the guy who could bring back Ron’s tunes with a new twist. Another wonderful Winterland “It Must Have Been the Roses” follows. This show also marks the end of a golden era for the fourth song of the set, “Eyes of the World.” This version isn’t in the same stratosphere as the one from the night before, although Deadheads have one last chance to savor the extended jazzy outro. On this night, the “Eyes” outro briefly unveils the melody line of “Slipknot!” before sliding into “Stella Blue.” Garcia’s soul burns as he croons “Stella.” The “Sugar Magnolia” set-ender, followed by the triple encore of “Johnny B. Goode,” “Mississippi Half-Step,” and “We Bid You Goodnight,” is a generous gesture, although it sounds like the band really needed this break. If any group ever earned a twenty-month vacation, it was the Grateful Dead.

For more on October 20 shows such as Worcester 83 and Winterland 78, check out Deadology: The 33 Essential Dates of Grateful Dead History 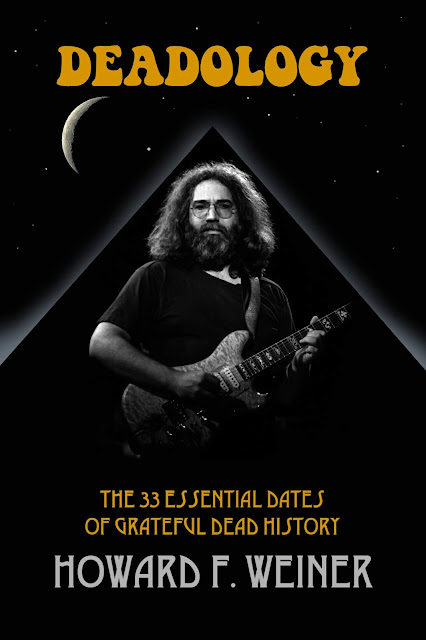 10-20-84 was my third Dead show, rode out on a bus from SUNY Buffalo with a lot of dead freaks . . . great night, in my opinion the whole 2nd set is among the best sets the Dead ever did. Jerry's soloing throughout feels like the culmination of the early 80s sound for him :)