To most folks in New Jersey, Englisthown is a haven for redneck extremes—drag racing, funny cars, and monster trucks. To Deadheads, especially those on the East Coast circa 1977 and beyond, Englishtown is where their beautiful obsession with the band began, whether the baptism was on the grounds of Raceway Park on September 3, 1977, or thru the radio broadcast on that blessed evening, or sometime in the future via bootleg tape or Dicks Picks Volume 15, the officially released three-CD set of Englishtown. 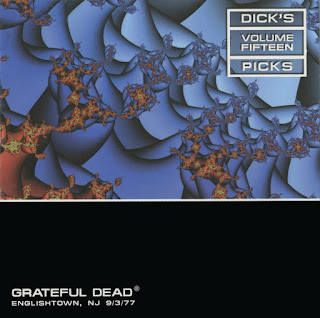 My Englishtown tale began in 1981, two months after John Lennon was gunned down on the outskirts of Central Park, and a week after the attempted assassination of President Ronald Reagan. On that fateful morning, I arrived at Clarkstown South High School and quickly spotted the cat who sold the juiciest bones in town. On this morning he was also selling bootleg tapes. He showed me an impressive list of shows by legendary rockers, but one show leaped off the page: Grateful Dead at Raceway Park in Englishtown, New Jersey. Although I didn’t know the song list or the quality of the BASF tape, Englishtown was the tape I had to have, it was as if the tape chose me.
As a youth, I spent endless hours listening to New York’s top hit station, Musicradio WABC. I used to hear Gladys Knight & the Pips, The Spinners, Stevie Wonder, McCartney & Wings, Sly & the Family Stone, Elton John, Marvin Gaye, David Bowie, The Eagles, America, Harry Chapin, Grand Funk Railroad, Linda Ronstandt, and Paul Simon battle it out for top spot on the charts week after week. Anyway, one of WABC’s top advertisers was Englishtown. The commercial began with a helium infused voice: “Ha- ha-,ha-ho, Raceway Park, Englishtown, New Jersey!” The follow up message talked of funny cars, drag racing, and other arcane activities. Englishtown and the Grateful Dead seemed like a fine connection, sure to arouse the ghosts of Old Weird America. 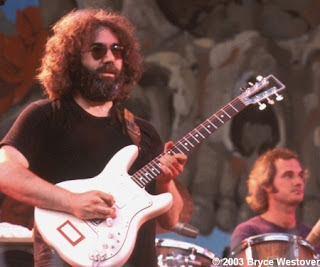 I had recently started listening to some Grateful Dead albums, but that morning, I was blown away by Englishtown’s monumental “Mississippi Half Step.” The pre Rio Grande instrumental was the greatest piece of improvisation I’d ever heard. After hearing Englishtown’s radiant “Eyes of the World,” I finally understood why people considered Jerry Garcia to be the greatest guitarist in the universe, and why Deadheads would travel anywhere to see this band.

Looking back at the summer of ’77, Englishtown could have been a disaster of Altamont proportions. Raceway Park was only forty-five miles from New York City, which was suffering from an overdose of the summertime blues. Son of Sam, the most feared serial killer of his time, was firing lead into lovers making moves in parked cars, and taunting police in the tabloids. The Bronx was burning from a never-ending series of arson fires. The New York City blackout on July 13 triggered chaos and rioting in the streets, and it exposed the rotten core of the Big Apple. In addition to all the madness, the East Coast experienced one of the hottest summer’s on record. With 150,000 restless stoners pouring into Englishtown on an oppressively hot Labor Day weekend, and the Grateful Dead coming off of a three-month touring hiatus, the outcome was highly uncertain. 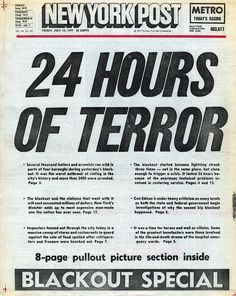 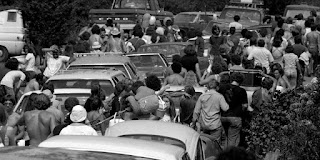 Outside of a massive traffic mess that forced concertgoers to park their cars several mile from Raceway Park, things fell into place. Deadheads and Southern Rockers swayed and jammed as one as the New Riders of Purple Sage and Marshall Tucker Band entertained. According to most witnesses, a plethora of acid was available and consumed, but the first hairy moment of the day was when a woman went into labor after the Marshall Tucker Band performance. A helicopter was flown in to evacuate mom, and she gave birth to a healthy baby boy.

It was still hot and humid when John Scher introduced the headliners: “Okay. Here we go. On keyboards, Mr. Keith Godchaux. On lead guitar, Jerry Garcia. On vocals, a very nice lady, Ms. Donna Jean Godchaux. On drums and percussion, Mr. Bill Kreutzmann. On drums and percussion, Mr. Mickey Hart. On rhythm guitar, Bob Weir. And on bass, Phil Lesh. Ladies and gentleman, the finest band in the land, the Grateful Dead!” 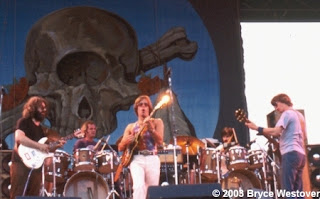 After successfully going down the path of least resistance with the first three songs, Bob Weir urges the surging crowd to take a step back before the band bursts into “Mississippi Half Step.” There’s a gleeful bubbling to Jerry’s voice, he’s reunited with one of the defining masterpieces of the Grateful Dead’s remarkable ’77 run. The pre Rio Grande jam is smoking with a pair of climatic peaks. Before returning to the bridge, Keith begins to twinkle a lovely melody that captures Garcia’s fancy. Jerry responds with robin-like tweets as Phil’s bass begins to rumble in the distance. The jam escalates, but the band has the wisdom and good taste to reign the jam in before it becomes overindulgent. It’s a sublime moment, and Englishtown roars approval in unison. The perfectly harmonized Rio Grande bridge is pursued by an ample outro solo. There was a myth that the Grateful Dead failed to rise to the occasion on the biggest of stages. That myth was officially debunked by the Englishtown “Half Step,” The other highlights of the first set were a two solo “Peggy O,” and a hot “Music Never Stopped,” although it’s not one of the elite versions of the year. 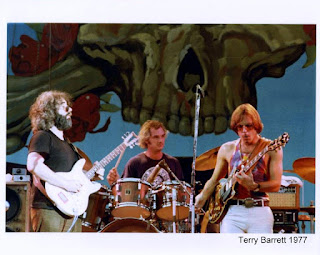 As the hippie throngs baked between sets in Raceway Park, millions of Americans were preparing for an emotional evening of television. The final episode of The Mary Tyler Moore Show aired on this Sunday night. America had to kiss the somewhat wholesome girl next door goodbye. In the world of popular music, Andy Gibb’s “I Just Want to Be Your Everything” was dethroned from the top spot on the charts by The Emotions’ “Best of My Love.” And with all the great albums available in record shops, Barry Manilow Live was the bestseller of the week. For those who preferred debauchery and improvisational theater over American fluff and puff, the Grateful Dead took the stage for act two in Englishtown. 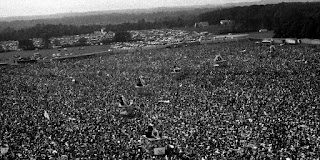 Set two kicks off with a turbocharged Bertha > Good Lovin, and during “Loser,” Garcia nails a moaning blues solo that for all the ramblers and gamblers holding a losing hand. Next up, Weir performs his new pride and joy, “Estimated Prophet,” which segues into a stunning “Eyes of the World.” There are some better ’77 versions, but this “Eyes” is sophisticated and gorgeous. Garcia shines in his less-is-more motif, and when he cuts loose, the impact is heavy. This is magic and alchemy of the highest degree in front of an intimate gathering of 150,000. 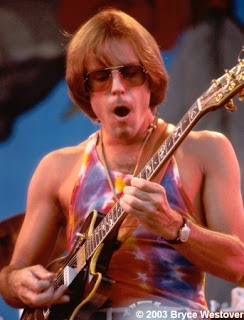 The next great segment takes shape as the band segues from “He’s Gone” into “Not Fade Away.” Let the cat and mouse games commence. The jam slowly builds and retreats, two steps forward, one back—one zig east, two zigs west. After the opening chorus, the music thunders, intense and dark, until it morphs into a zone where fusion, funk, and heavy metal grind. It’s as gnarly and gruff as the racetrack where Deadheads are still sweating as nightfall descends. When the NFA journey recedes, Weir blows a whistle to announce the first “Truckin’” in three years. For some of us tour veterans who saw “Truckin’” every three nights for fifteen years straight, it’s hard to imagine what a thrilling moment this was. Old school Deadheads fondly embraced “Truckin’” as a gateway song to long mind-bending jams, and the new wave of fans embraced this as the quintessential song from Skeletons in the Closet. And for historical purposes, the return of “Truckin’” was another notch of distinction for a show that was an instant classic.

After a long, hectic day, Englishtown was revved up and begging for more. Jerry returned to thank the crowd, and Phil bellowed, “All right! Woo-hoooo! Alright ladies and gentleman, we’d like to play a little ditty from our newest album at your record stores currently.” Ah, the gold ole days when we’d hustle on down to the local record shop and flip through album bins. The “little ditty” Phil was referring to was “Terrapin Station,” an heroic eleven minute encore. Showing no signs of weariness, Garcia calls 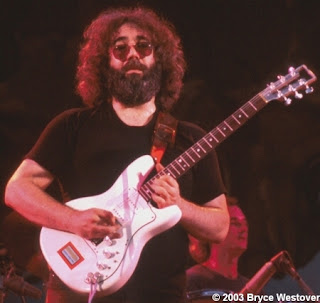 upon the muses: “Inspiration, move me brightly. Light the song with sense and color hold away despair. More than this I will not ask, faced with mysteries dark and vast.”


As they reach the final stages of the anthem, the crucial question is posed: “Terrapin, if it’s an end or beginning?” It may have been the end of a colossal concert, but for the band and their fans, it was the dawn of a new Dead era. With the mass exodus out of Raceway Park underway, thousands upon thousands of fans marched to their cars as the majestic “Terrapin” refrain echoed in the hot Jersey night. It was an experience that any rookie or seasoned Deadhead would never forget. They would pass on tales of this day to anyone who would listen. Being at Englishtown was a badge of honor that they would wear
proudly. And as the radio and audience recordings of this show multiplied, a new crop of Deadheads were ripe for picking. Although Englishtown might not be the best show of the 1977, it’s one of the defining events of Grateful Dead mythology. Before they stepped on stage, a baby was busy being born in a sea of hippies. By the time they were finished with Englishtown, the Grateful Dead had turned on a new generation of fans. Terrapin Nation was busy being born.
For more on Englishtown and a year beyond description, check out:
Grateful Dead 1977: The Rise of Terrapin Nation
at September 03, 2017

I went to Clarkstown N. A bit.