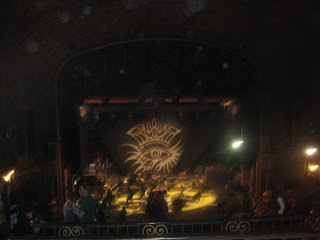 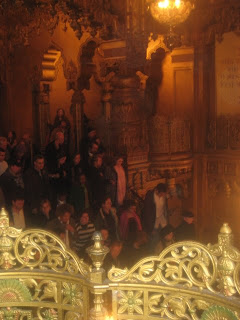 11-21-08
Almost two years ago to the day (11-20-06), Dylan closed out his initial Modern Times tour with a barnburner of a performance in Midtown at the New York City Center on a seasonably warm evening. It was windy and chilly on this occasion as I left work and boarded an A Train for Washington Heights and the United Palace Theatre. This renovated theatre also serves as a place of worship for Rev. Ike’s Church, so Dylan opened with “Gotta Serve Somebody.” Bob hadn’t played that in awhile. It sounded great as Dylan stood and delivered from center stage swiping in nifty harmonica licks between lines. A few songs later, Bob sang, “This is a day only the Lord can make,” as he concluded “When the Levee Breaks.” What a version! Hellfire blues, lean and mean.
“The Times They Are-A-Changin” and “Things Have Changed” sizzled in the second and fifth spots respectfully – awesome songs to contemplate as I swayed in my third row dead center loge seat. I was locked in tight and out of range as I pounded tap beer in my dark blue business suit, I was dressed like a member of the Cowboy Band. With the economy disastrously freefalling, anthems like “It’s Alright Ma” were more relevant than ever before –“Money doesn’t Talk it swears…Even the President of the United States sometimes must have to stand naked.” Good luck Obama, you’re gonna need some help from the Lord above. Dylan looked out into the crowd truculent as a rooster and howled, “He not busy being born is busy dying.” I’ve seen a lot of versions of this song over the years, but none were as powerful or as electrifying as this one. As one would certainly expect, “Desolation Row” was a thrill to witness, though it started out a little choppy. Dylan’s organ playing was magnificent here, fascinating stuff; nobody is on this guy’s wavelength, though the Cowboy Band does a magnificent job following along. This was a great night for the band. Surprising the faithful with “Tomorrow is a Long Time” in the fourth spot, Dylan had unleashed a supreme concert through the first half.
After spoiling us with lobster medallions, Dylan served cheese puffs for the next five songs. I’m quite fond of “Beyond the Horizon,” but Dylan has yet to nail it in concert. The musical arrangement was fetching, but his vocal cadence was way off. “Make You Feel My Love” had a great harp finale. “Spirit on the Water” was well played and received, but it was the fifth consecutive uninspiring selection. However, everybody was happy. Much ganja filled the air. There were no lines for fresh tap beer or the restrooms. Seeing a concert at this venue is a pleasure you must experience.
Bob stripped all the meat off the carcass with a curt “Highway 61,” knives scraped against bone. Recile was a beast pounding the percussions wildly. Tenacious rock-and-roll thundered through the palace, 67 year-old Bob Dylan had conquered NYC all over again. As the crowd went bananas, Dylan shuffled out from behind the organ, looked at Garnier, looked at the crowd, and then raised his arm and began to fidget around with the back of his neck behind his top hat. He looked like a pitcher in search of a foreign substance for the purpose of doctoring a spitball. We were back on track. Dylan performed “Ain’t Talkin” with visceral preacher-like charisma –“They say prayer has the power to heal so pray for the mother.” The band crisply played four unique and succinct solos. An incredible masterpiece was painted at the theatre. Dylan’s vocals were exuberant during “Thunder on the Mountain” and he dished out an extended organ instrumental. The three-song encore consisted of the usual culprits with extra zest. That “Watchtower” was positively wacky and the crowd adored Dylan’s guitar solo during “Blowin in the Wind.” Dylan’s still leaving a greasy trail, so I’ll be back for many more in 2009.
http://www.visionsofdylan.com/ "The world of research has gone berserk"
at November 22, 2008